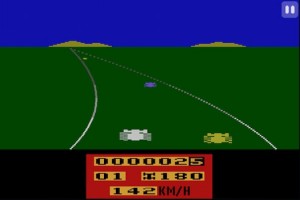 Bad weather is often annoying in video games, but in 1983 Activision released a racing game for the Atari 2600 based entirely on the concept of driving in horrible conditions. It was called Enduro and on May 5, 2011 you’ll be able to check it out on the iPod Touch, iPhone, and iPad. That’s, like, soon!

Enduro, just to be clear, is an actual racing game. The goal is always to pass other cars and “win” the opportunity to participate in the next race. The weather hook is a random element, but also a defining one: as you race, you’ll encounter snow, fog, and rain, all of which have an effect on the pace at which you can race.

For example, when it’s snowing, it’s not wise to put the pedal on the floor, as you’ll no doubt cause a wreck as you lose control.

Developer Nemo Games is responsible for this iOS port of Enduro. For the most part, it appears as if the studio is keeping the game generally as is: the visuals look on par with the original, and the stiff, Atari-age movement is still very much “in.”

The controls, however, are receiving an upgrade. Now, you’ll be able to tilt your device to move the car left or right on the road. Previously, you had to use a joystick.

Enduro saw its last re-release in July 2010 on Microsoft’s Game Room for Xbox LIVE Arcade and Games for Windows LIVE. Before this, it was released as part of the disc-based Activision Anthology collection in 2002.

These two little fact nuggets are leading me to an uncomfortable question: Does Nemo own the digital rights to this game? If so, how did it obtain them? Less than a year ago, at least, Atari or Activision were able to put out a digital version of the game on a new platform — or, at least, strike a deal with Microsoft for the port.

The answer is that Nemo hasn’t been given the rights or OK to release an iOS port of Enduro. In an e-mail exchange (I asked if it had the IP), a representative told us “We saw other Atari 2600 games on the App Store and we believe that they are without IP. We didn’t claim that we have the IP, so we recreate Enduro for 2600 lovers… but, no, we don’t have IP!"

But if whoever owns the IP come a knockin’, Nemo will take it down. “And we hope that people don’t get mad at us because of doing so," the representative said. “We’d instantly remove the app if we’re told by the owner of the stuff." So… there’s that.