If you’ve never heard of The Impossible Game [99¢ / Free]] go ahead and take a minute to clear your schedule because your going to need some free time. Released just over a year ago on the App Store, The Impossible Game is a port of the highly popular Xbox Live Indie game under the same name. While it’s a platformer by nature, there’s one major difference about The Impossible Game that really makes stand out from the rest: As the title might suggest, this game is hard.

The game’s graphics consist of only 2 shapes, squares and triangles. The Impossible Game won’t win any awards in the graphics department it makes up for it with some of the most original platform gaming I’ve ever experienced. The gameplay is simple and straightforward and consists of a square that moves automatically through a level at a blazingly fast speed while you try to tap on the screen to make your square jump over and onto other squares, all while trying to avoid smashing into them head on. 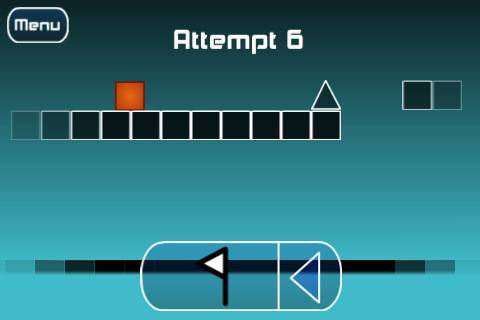 When you fail (and you will) and hit a box or land on some spikes you will automatically start right back at the beginning of the level and start over from scratch. Luckily there is a practice mode which allows you to place flags down as you progress through the the level so you can restart from your last dropped flag, but what makes this game so “impossible" is to truly beat a level you must make it all the way through from start to finish with only one life.

Even though it looks like a simple platformer from the outside this game still feels unlike anything I’ve ever played before, due in part to the way the levels are setup with the boxes in some crazy configurations with some needing to be climbed like an endless staircase and the rest needing to be precisely timed with the perfect jump or release of the screen, all the while moving at sonic speed. 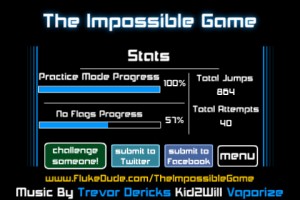 The music consists of catchy techno beats that really tie in the precision jumping with the the frantic gameplay to perfectly produce a platforming package that I’ve yet to experience anywhere else. Even after a couple hundred plays through, the music still felt like a critical part to beating the game and not once did I want to turn it off as it seems to really help you to time jumps to sections in the song.

Because of the difficulty of this game, If you find you have the patience to finally beat these levels you will truly feel you have accomplished something amazing in a video game… Even if the reward at the end of a level is lackluster to say the least.

Keep in mind it will get quite frustrating to beat a level in one life, but once you do, it will be burned into your memory for life as a result of (potentially) hundreds of retries. This may somewhat diminish the games replay value, but I still continue to pick it up from time to time to see if I’ve still got it. Regardless, the game comes standard with two levels, each of which should take you quite some time to beat. If you’re looking for more there’s also a 99¢ IAP level pack to add an additional two levels.

Sure The Impossible Game came out quite a while ago, but it’s still a ton of fun. If you liked the game on the Xbox 360, you’ll likely enjoy it just as much on the iPhone. Otherwise, if you’re the kind of person who gets into brutally difficult games and doesn’t mind endlessly retrying levels until you get it right, look no further than The Impossible Game.