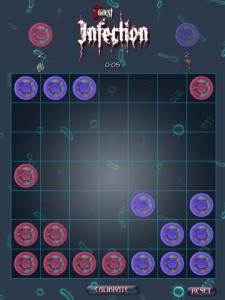 I’ll cut right to the chase here- The 7th Guest [$2.99 / HD] is without a doubt one of the most memorable games I’ve ever played. It landed at the perfect time between the CD-ROM drive being released and everyone trying to figure out what to do with it. Hell, I still remember the solutions to most of the puzzles. I say most of the puzzles because all of them had a very cut and dry solution except for the dreaded microscope puzzle which actually pit the player against a surprisingly difficult (at least in my opinion at the time) AI-based game which had no solution other than flat out beating the AI.

The microscope puzzle actually existed in a few different forms before its inclusion in The 7th Guest. Originally released as Infection in 1988, the game eventually made its way to arcades as Ataxx. Also, oddly enough, the same gameplay mechanic was also repurposed for the NES, Gameboy, and PC game Spot which featured 7-Up’s Cool Spot mascot– A complete 180 from the maniacal Stauf’s microscope. This game has since been re-released again as The 7th Guest: Infection [99¢], a re-built (currently) iPad-only re-imagination of the microscope puzzle.

The graphics have been redone, and of course the game now is entirely touch-controlled. You can play locally against friends, or single player against Stauf who, complete with taunts, will school you at the game in seven different difficulty levels. Gameplay is similar to how I remember it, and players taken turn placing pieces on the game board. The object is to cover as much of the game board as possible. As you move your pieces around, adjacent opponent pieces change color, allowing you to take over the game board with clever positioning.

The 7th Guest: Infection has sky-high nostalgia values for anyone who was a fan of The 7th Guest, especially considering the fact that the microscope puzzle was mysteriously omitted from the iOS port. The gameplay is timeless, and is worth checking out if strategy games are your cup of tea. In fact, I’d go as far as to say if you like heinously difficult AI in an abstract board game scenario, The 7th Guest: Infection is a must have.