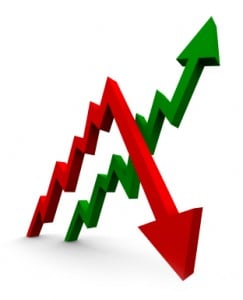 Careful watchers of the top charts on the App Store have noticed an interesting trend over the weekend with various apps inexplicably substantially changing position. Previously (and possibly still currently) Apple seemed to use the number of downloads an app had to form both the top free and paid lists. While this method might have made sense originally, gaming these download-only lists has turned into a remarkably profitable enterprise for those that have apps with a large install base which also have a way to push users into downloading other apps.

If you’ve played a freemium game lately that offered some kind of benefit for downloading a completely different game, chances are the developer behind the title you’re being incentivized into downloading paid the original developer a bucket full of money for that promotion. For both developers it’s a win/win situation, one (often) gets a fat stack of cash while the other gets a massive boost in overall charting position along with all the benefits that includes. The issue with this is that clicking a link in your favorite social farming time sink to get more virtual oats for your virtual cows to download another game creates a top-download list that might not be entirely representative of what people are actually even using for anything more than that download bonus.

Google’s Android rankings also used to work like this until a recent change that substantially altered the algorithm which resulted in apps like Seesmic [Free] jumping from #39 to #10 while Gowalla [Free] went all the way from #78 to #18. Developers speculated that the cause for these jumps were something referred to as the “sticky factor" which instead of relying only on downloads looks at daily active users, or perhaps factoring in a ratio of daily active users compared to monthly active users. Of course Google hasn’t commented on what actually is going on behind the scenes, likely out of fear that this new system will be gamed like the old lists. 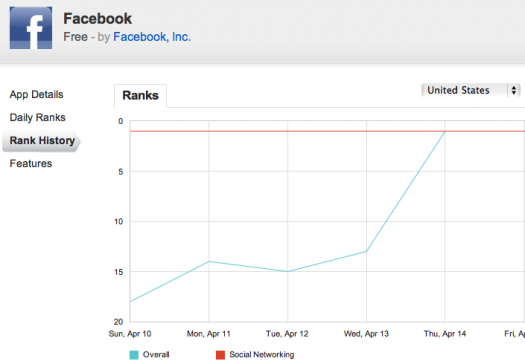 Apple could potentially to be following suit with a similar algorithm which might explain some recent shifts in the free charts. For instance, Facebook [Free] previously was comfortably floating around the middle of the top 25 for quite some time, and recently shot up to #1. Similarly, Pandora [Free] jumped into the top ten after living in the top 20’s for ages. Speculating this has to do with engagement-based charting could make sense, as there wasn’t any immediately apparent reason (such as a large influx of new devices from a launch or something similar) for Facebook to see a massive surge in downloads over the weekend. Previously, the amount of downloads needed to even climb single positions in top ten free was incredible, making it even more likely that the top lists as they are now factor in something else.

What that something is is anyone’s guess. Apple obviously is notoriously secretive, so it will likely be up to developers analyzing their apps’ movements on the charts compared to their own analytics inside of those apps. From a gaming perspective, it will be interesting to watch what kind of impact this new charting algorithm has on the freemium market which historically has been heavily influenced by paid installs, incentives, and other tricks to game the system sending specific games rocketing up the charts. If they are in fact using daily active users to factor in how apps are ranked, developers are going to need to build freemium games that are actually engaging to play which keep people coming back instead of cutting deals with other developers to essentially buy chart positioning.