Last week a little gem of a game was released into the App Store called Tactical Soldier – Undead Rising [$4.99]. Now, I know what you must be thinking, and yes the whole zombie thing has totally been done to death (undeath?). But the highly tactical turn-based gameplay in Tactical Soldier will have you forgetting all about that, and the zombie theme is actually used to great effect in telling an interesting story and creating tension in the game.

You play as a soldier in a military base where an experiment has gone awfully wrong. Scientists have developed a chemical in an effort to create super soldiers, but instead it ends up turning them into bloodthirsty zombies. Yeah, it’s a bit cliché, but it fits the game well. The graphics are entirely rendered in 3D, and although the character models aren’t the most detailed, the environments have a wonderfully creepy mood to them. The story unfolds with comic book-style cutscenes which do a good job of telling the gritty tale. 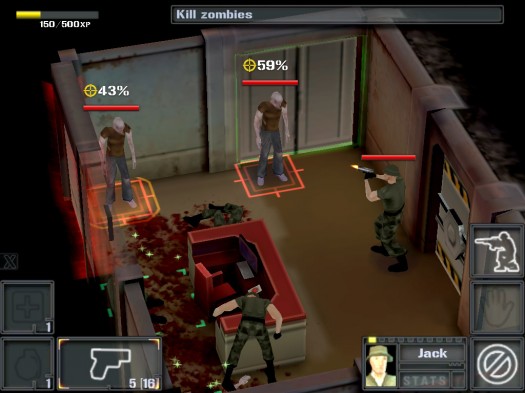 The first thing Tactical Soldier does right is offering a great user interface for interacting with the game. Pinch and swipe gestures allow you to move the camera at any time to wherever is needed to give you the best angle. Gameplay is grid-based and a smart use of single and double tapping allows you to have great control with all of your movements. The touch detection can be a little finicky at times, but overall the game is incredibly intuitive and feels built from the ground up with touch screens in mind. 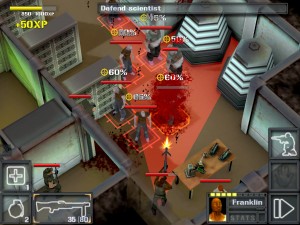 The single player story-driven campaign in Tactical Soldier requires a great deal of strategy to be successful. Careful conservation of ammo and deciding what weapons to equip your squad of soldiers is key. It’s a really challenging game, but thankfully there are fairly spaced checkpoints so you can retry areas if you’re tactics don’t work out for the best. And you will die… a lot. But it never feels frustrating, rather, it’s fun to rethink how things went wrong and retry a scenario with a tweaked game plan.

You start out controlling a single soldier, but will add more playable characters to your group as you come across survivors while exploring the huge military base. Experience is earned for defeating enemies, and you’ll gain skill points which can be used to increase various statistics in each of your soldiers. Weapon and equipment slots are also limited, and you’ll need to make some tough decisions as to how to equip and upgrade your team. Enemies also start out fairly tame but quickly ramp up in difficulty and ferocity, including several tough boss encounters throughout the game.

Tactical Soldier is a pleasant surprise for fans of tactical turn-based strategy games. It’s incredibly challenging, but as such it’s also incredibly satisfying when you figure out the best way to deal with the many scenarios in the game. A player in our forums described the game as Resident Evil Tactics, should that game actually exist, and I think that totally nails it. It’s a universal game, and although I’ve been mostly enjoying it on the larger screen of the iPad it’s also very playable on the smaller screen of the iPhone and iPod touch. If you’re looking for something new to scratch your tactical itch, then Tactical Soldier – Undead Rising is highly recommended.