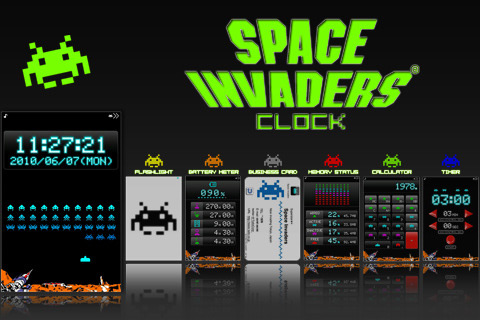 I’ve loved Taito since I was a child. And regular readers who have some idea how long I’ve been gaming likely know why. They created Space Invaders, perhaps the first video game I ever played and one of the most iconic games in history. I played it in the arcade not long after its 1978 release and it was first on my list of must-haves when I got my Atari VCS so long ago. I even got the tattoo!

Over the years we’ve seen a few official sequels emerge on various platforms. There were the enhanced SNES and Playstation ports. Also Space Invaders Extreme for the DS and PSP. Not to mention Space Invaders Get Even for the Wii and Space Invaders Infinity Gene [App Store] for iOS.

And they were all awesome. 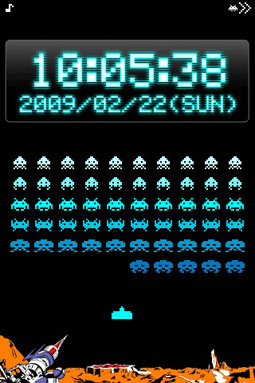 But it is with sadness that I must acknowledge my change of opinion of the game studio known as Taito with their release of Space Invaders Clock [App Store].

Space Invader Clocks presents the oh-so familiar field of Space Invader alien squid, with your laser turret below — no surprise there. And then, of all things, the current local time is displayed at the top of the screen. (Curious, that.) At any rate, I settled in for some aline blasting action — only to find that there is none!

No matter what I do, I cannot take control of said turret to start eviscerating the alien horde. There is no touch control, there is no tilt control. There is no multiplayer via Bluetooth or WiFi, and there are certainly no online leaderboards to speak of. Space Invaders Clock simply sits there, and once every sixty seconds an alien is automatically blasted off the gamescreen.

Space Invaders Clock is about as engaging as watching bread mold. I expected so much more from this renowned, veteran studio that my experience with this recent release has retroactively sullied my opinion of Taito. Yes, it’s is a free download, but I must urge readers to avoid it even still, as the time spent in grabbing it from the App Store is time that cannot be recouped.

I only hope that the studio redeems themselves with the subject of my next review, Space Invaders Battery Meter [App Store]. Stay tuned for that, shortly.