Here’s a weird one: NBA Jam [$4.99] on consoles won’t be receiving a roster update that reflects all the mid-season moves teams made as the NBA trade deadline closed, but the mobile version of the title will — and has. Starting now, one can go on a massive losing skid as the Knicks led by Carmelo “Defense Is For Babies” Anthony or, even better, get some insight into Deron Williams’ surely deep, deep depression as a member of the Nets.

As if roster updates weren’t enough, EA has also thrown in some “tweaks” to the core experience. The patch notes aren’t available online, but I’m assuming some of the bugs users have been freaking out about since release have been addressed. 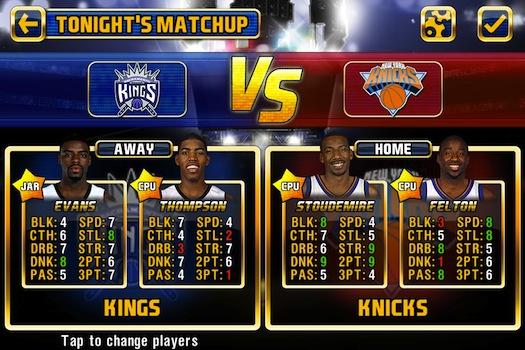 If you’ve been on the fence about NBA Jam, well, this is as good of a time as ever to get into the experience of the terrific arcade basketball title, especially since EA is obviously willing and able to update the game with current rosters — something even the console owners won’t be getting after dishing out 40+ dollars for their version. We can point and laugh at these guys now, right? Finally!