I have some history with other versions of Max and the Magic Marker [$1.99 / HD] . Back in Jan. 2010, I previewed a PC build of the downloadable Wii version. I dug what I saw, though held back on the write-up because the build wasn’t native. At the time, it was suggested to me that Max could make it to other platforms. I’m slapping my head now because I didn’t even consider a touch-based port.

That was stupid of me. Max and the Magic Marker’s core mechanic — the drawing of objects — is a more intimate affair with a touch screen. In more measurable terms, the drawing is more precise and satisfying with a finger. Unfortunately, nothing else about Max translates so well.

In brief, Max is a side-scrolling puzzle / platform game wherein you control a imaginative boy who has just been thrust into a colorful world of his conjuring. The obstacles are the same that you’d see in other joints in the genre — open pits, water, and odd pieces of geometry — but the hook in Max is that you can construct your own bridges, or stairs, or oddities to circumvent obstructions. 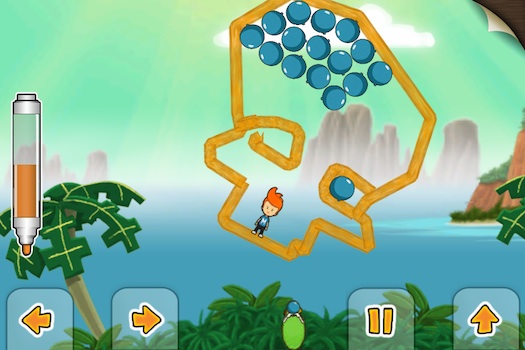 It works a little something like this: you walk up to the lip of a pit, stop, and then draw a thick orange line across the two ends, thus giving you an easy passage. Later in the game the obstacles get more sophisticated. For example, at several points, you’ll need to scribble a makeshift skateboard in order to ride across pits of gears. It’s harder to do than you think.

And still later on, you’ll also have to start paying attention to the game’s physics, as weights and counterbalance puzzles start popping up. These are simple, as the game doesn’t give you all that much credit. The favorite physics puzzle seems to be the see-saw, which has you drawing thick balls that drop on one side of the see-saw in order to catapult something, or you, on the other side.

I think what’s special about all of this is rather obvious: your solutions are flavored by your own choices. You don’t have to make a solid line to cross a gap; you could also, to go to the extreme here, draw the Golden Gate Bridge or something — provided you’ve the ink. 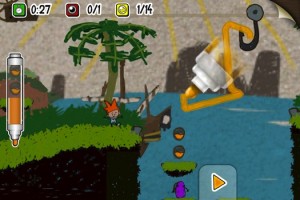 To get the ink required to draw, you need to collect little bubbles in the levels, which are easy enough to find. I should note that levels also have tons of other collectibles and each world of levels has a different, though still as colorful, theme. It’s satisfying stuff in terms of level design and palate cleansing.

Where the game lacks is in the virtual controls for the boy. The left and right direction arrows leave a lot to be desired in terms of precision, which is an interesting contrast to how incredibly well the drawing mechanic works. Also, the jumping and the pushing of basic environmental objects are tied to buttons that appear on the right-hand side of the screen, well out of the way of the your hand, making even basic movement a hassle. These control issues are noticeably worse on the iPad, where all of the buttons are absolutely massive and nowhere near ideal for the thumbs of any human.

In general, these faults don’t necessarily kill the experience. Max and the Magic Marker is a laid back joint; it doesn’t require a lot of split-second decisions, mitigating control issues to some degree. Also, elements and obstacles are pretty well spaced, giving you room to mess up and even struggle with the controls. There’s also a pause functionality that allows you to pause the game then draw, which can make things a little more forgiving. But if a seamless and intuitive experience is something you absolutely desire, I recommend grabbing the Wii version of the game instead. It’s just easier to use the buttons on the controllers to guide the boy around his world in that specific version.

So, the verdict here is that this is a solid port of an imaginative game that puts a lot of control in your hands. You make the bridge, the make the weight, you make the thing that helps you reach the end point. I should also add that there’s a lot of game in this package; there’s tons of levels and worlds, so you’ll be spending some time with the game. As a whole, I’m digging this version, despite the control struggles — but it might be best to steer away from this one if you demand perfection for your five or so bucks.