If you were an arcade dweller like me back in the 80s and 90s, you may recall a light gun shooter called Operation Wolf. The game featured a machine gun mounted on the arcade cabinet that let you shoot up all sorts of enemy soldiers and vehicles in an effort to rescue hostages in the game’s 6 stages. Operation Wolf went on to be ported to just about every single gaming platform in existence in the last 20+ years, and while it hasn’t officially come to the App Store Ivanovich Games has done the next best thing and created an homage to the title called Operation Wow [$1.99/HD] for the iOS platform.

Operation Wow has been lovingly crafted in the vein of Operation Wolf. The graphics have been drawn by hand giving it a cartoonish look, and the thin storyline of the original has been axed, but everything else about Operation Wow will tickle your nostalgia bone if you were a fan of its inspiration. The 6 stages in the game follow the same themes as the arcade game, and there are similar enemy soldiers and vehicles like armored tanks and helicopters firing at you from just about every direction. 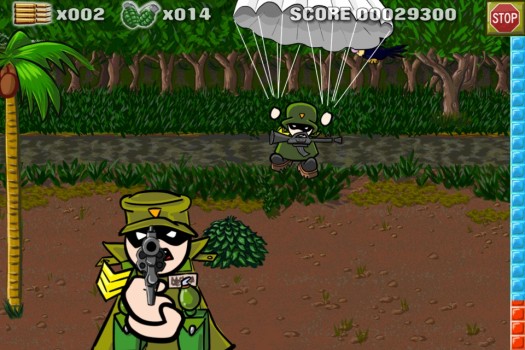 Gameplay involves simply tapping to shoot, but Operation Wow takes advantage of multitouch allowing you to shoot up to 10 bullets simultaneously (or possibly more, I ran out of fingers to test with). It lacks the impact that holding a physical gun controller with force feedback recoil had in the original, but it works well and makes for some fast-paced action with all the enemies that pop on screen. You can also toss grenades by swiping upwards on the screen in the direction you want them to go, which works well. 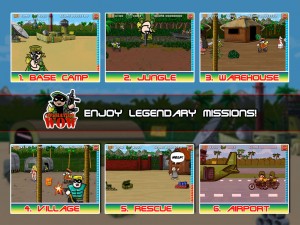 Ammo is limited in Operation Wow, so there is some strategy to when and where you decide to pull the virtual trigger lest you waste it all away and become a sitting duck. Additional ammo can be acquired by shooting certain animals that have unfortunately moseyed into your line of fire, or by shooting certain objects or elements in the terrain. There’s also several types of innocent people that will wander into the battlefield and must be avoided, and taking fire from enemies or shooting civilians will chip away at your health bar on the right side of the screen.

One really neat addition to the package is the inclusion of two mini games, Targets and Meat Ninja. Targets is a scrolling shooting range filled with bullseye targets. You’re judged by how quickly you’re able to shoot green targets while leaving the red targets alone, and it’s a great use of the multitouch shooting feature. The second mini game, Meat Ninja, is a salute to Fruit Ninja and has various meat-based foods launching up from the bottom of the screen which must be shot down while avoiding the grenades that get tossed up with them. It’s a fun diversion and also a funny nod to the classic iOS title.

Operation Wow really succeeds at being a loving tribute to fans of the original game, but even if you’re unfamiliar with Operation Wolf it’s still a pretty solid arcade game in its own right. Sure, it’s a tap-to-shoot gallery shooter that we’ve seen many times before on iOS, but the addition of multitouch firing and the subtle strategic element of limited ammo make for a fun time. Game Center is also included for leaderboard and achievement tracking. The redrawn graphics look great, and there’s all kinds of little touches throughout the game that give it personality.

It feels most at home on the larger screen of the iPad, where you can set the device down and put all your fingers to work, but I was surprised at how well it works on the smaller screen of the iPhone and iPod touch using two thumbs to fire. No matter which device you use though, Operation Wow is worth the price of admission if you were a fan of Operation Wolf. Even if you weren’t it’s still worth taking a look at, and the players in our forums have been having a great time with this one as well.