In case you’ve been under a rock, Tiny Wings [$.99] is the new App Store sweetheart, replacing Angry Birds [$.99 / Lite / HD] as the must-have bird based mobile game. The two differ, but both have one thing in common: a wonky physics engine that informs the core mechanic. In Tiny Wings specifically, you fiddle with momentum, gently pulling a fat bird downwards towards a slope in order to feed it more gas for its next abrupt flight.

Now, we’ve got Pilot Winds [Free], another bird based game based on a similar idea. There is no chicken and the egg drama here, either. Pilot Winds was apparently in development before Tiny Wings launched. 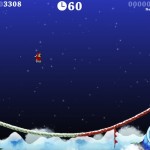 Pilot Winds wants you to wrap your head around momentum, too. The distinction is that your avatar isn’t a chubby bird with meager flying skills. No, in this game, you control a penguin who slides on ropes constructed in a series of slopes, all designed to give you the speed to rocket it into the air at fast clips. The motions reminds me of skiing, but as you’ll notice, the penguin isn’t equipped with skis.

There are a couple of hooks to it, too, mainly in the points area. When you press your finger on the iPad or iPod to bring the penguin down, you can, optionally, “bounce” off a rope to maintain modifiers. You can also give yourself an extra boost by timing a jump or landing without sacrificing speed. So, basically, this is a game about scoring big.

There are individual modes to support the leaderboard-infused nature, but most of them are nestled behind the .99-cent pay wall. “Mad Minute” is a 60-second dash to score the most points, “Checkpoint” is a progression-based mode that requires you to hit flags within a certain time frame, and “Freeplay” is your basic, Zen-like ski-a-thon.

You can download a chunk of the game for free right now, but for what it’s worth, Pilot Winds is a solid download. My caveman brain is enjoying the simplicity of the one-tap control and the basic acrobatics that you can pull off in the rush to gather points. As a whole, this is a pretty low-key, hardly involving game that is enjoyed in bursts. 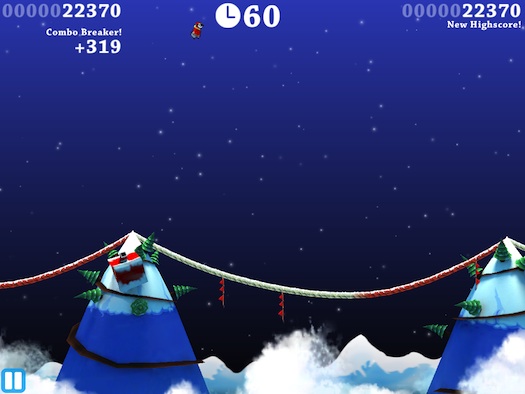 My one knock on the game involves the physics. They feel stiff. You’d figure the ropes would have a little more give and so would the penguin’s knees. That said, once you wrap your head around the engine and what the game desires, you’ll perform just fine. The tutorial seems annoying at first, yet it actually does a great job at pounding home how the game expects you to play.

I’m not going to get into the debate of what’s better, Tiny Wings or Pilot Winds, or why every App Store game stars a bird, ropes, or both, but I will argue that Pilot Winds is worth your time. I mean, c’mon, you can try it for free.