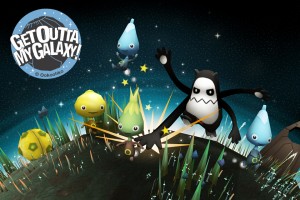 Imagine your life as a fat multi-armed dude named “All Waka" chilling out in space relaxing and eating rocks all day. Sounds good, right? Well, what would you do when an irritating alien race known as the “Wikus" come crashing your siesta? Slap them back in to space of course. I mean, it only seems logical, doesn’t it? That’s the premise of Get Outta My Galaxy! [99¢] in a nutshell.

All Waka’s movement in the game is controlled by tilting, and your multiple appendages can be sent flying by tapping anywhere on the screen. Each level, much like Super Mario Galaxy is a unique planet with different kinds of vegetation, obstacles, and more. They’re all spherical in shape, and generally are small enough that you never really get lost. Progressing in the game requires clearing a planet of Wikus, which just involves giving them a smack with one of your arms. There’s a number of different types of Wikus, and various power-ups as well to mix things up. After you’ve “dealt with" all of the offending Wikus, you need to make it to a glowing stone of sorts, hit that, and you’re off to the next planet.

You can see how this goes together in the following gameplay video:

The game starts off incredibly simple, with you just randomly running around open planets slapping errant aliens. It’s almost too simple, and really my first complaint is how slowly the difficulty of the game ramps up. I about got bored of it just as it was starting to get cool, and it does get cool. Planets slowly evolve in to worlds filled with plants that can hurt you, maze-like walls, puzzles involving switches to open doors to access restricted areas, and more. It’s a ton of fun once you get to the more complicated levels, so make sure you stick with the game at least through the first galaxy.

Another thing I’d really like to see tweaked is how the tilt controls actually work. I feel like you need to tilt way too much to make your character move, and would much prefer a higher sensitivity setting. However, this and the difficulty progression are minor complaints, and shouldn’t dissuade you at all from giving this game a shot. 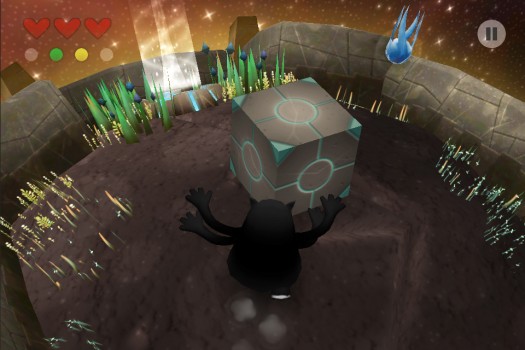 Forum members are having a great time with the game, and I can’t help but agree. Get Outta My Galaxy is a fantastic little game that not only looks great, but also is a lot of fun. Just make sure you stick with it long enough to see some of the more interesting level mechanics.