“The alien forces have arrived, but why are they dancing?" 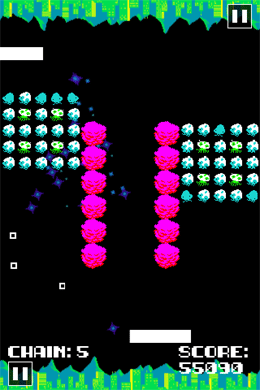 It’s to do with all the pixellated collaborative gaming goodness they’re bringing to iOS gamers, I’m guessing.

During the mid-week TouchArcade party we hosted out at GDC 2011, Cole Krumbholz of Koduco Games walked up with his iPad and challenged me to a match of his then-upcoming PongVaders Max [App Store], a follow-up to PongVaders: Episode One, his studio’s two-player, face-to-face, collaborative mashup of Pong and Space Invaders that sports a lovely retro aesthetic for both the eye and ear. The sad thing is, for one reason or another, we never covered the game. It was released back in August — and it’s awesome.

The game presents a playfield filled with Space Invaders-style aliens bent on pummeling the cities that you and your playmate are defending with swipe-controlled Pong-style paddles at the far edges of the screen. Said playmate is ideally a human friend, but in-game AI can take on the task for the lonely gamer. But whatever the case, it’s cooperative play — both players try to help each other destroy the alien horde.

The field of invaders in the center of the screen fire outwards, towards both players, and those shots can be repelled back upon them to turn their attacks into yours. Asteroid obstacles here and there make things especially challenging. An alien bolt deflected directly to the other player’s paddle supercharges the volley and, along the way, various power-ups can be collected to gain special abilities. When the aliens dwindle, shots can be directed in slow-motion by tilting the device, making for some wonderfully animated (in the physical sense) two-player fun.

As mentioned earlier, the original PongVaders: Episode One [$.99] is an iPad-only release that hit the App Store back in August. The big news from Koduco is the release of PongVaders Max [App Store], which landed since our demo at GDC.

The original PongVaders: Episode One featured 10 levels plus a boss fight. After listening to feedback from users, Koduco created a remastered Universal version of the game that runs natively on both the iPhone and iPad, available for free with 10 bundled levels, with 20 more available as an in-app purchase (for $.99). PongVaders Max features tuned physics, power-ups, sound, and visual effects — still retro — along with rebalanced levels and a tutorial for beginners. The game includes new invaders, two more boss fights, and new music from Nullsleep.

If all we were talking about here was the original release, we’d be talking about an awesome game. But the new PongVaders Max takes it to the next level. As a free download with 10 included levels, there’s no excuse for not grabbing this one for your iPhone or iPad right now — even if you have no friends.