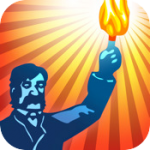 Head’s up: the puzzle game we called a “true App Store gem,” Helsing’s Fire [.99 / HD / Lite], just got a huge, free update. Version 1.4 sees a new campaign based in a place called “The Frozen North,” and a new villain called “The Ice Queen.” It also mixes things up a bit by giving you a new partner, two new survival arenas, and even some new mirrors to bounce light and tonics off of. That’s quite a bit, eh?

As of right now, Helsing’s Fire for iPhone and iPod Touch is sitting at the typical 99-cent App Store price point. If you’ve been thinking about jumping in, don’t fret. As our review states:

… Helsing’s Fire is even better than I expected. Dark gothic creatures wrapped up in amusing sequences of Victorian dialogue and, not to be forgotten, that excellent light and shadow puzzle mechanic. It’s one of the most unique games I’ve ever played and is a true App Store gem. Surely only a creature of darkness would let this one slip by them.

That’s big praise for a unique puzzle game that challenges you with the enormous task of taking down everyone’s favorite blood sapper, Dracula. And while I’d never say our word isn’t a big deal, I’ve got to point out that Helsing’s Fire is good enough to be an IGF award winner. The game took home the “Best Mobile Game" IGF award at the 13th annual event.