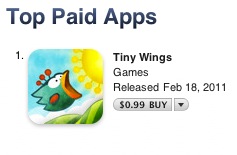 It really has to have been a crazy last few days for Andreas Illiger, the developer of Tiny Wings [99¢]. His first iOS game hasn’t even been out for a full week yet, and it was just two days ago that we gave it a glowing 5 star review and have basically been glued to it since. Over these past two days, the buzz surrounding Tiny Wings has been swelling like an epic tidal wave. It’s all anybody has been talking about on Twitter, it’s been one of the busiest discussion threads in our forums, and every iOS toting device owner I’ve run into in real life I’ve recommended the game to.

For having zero marketing, Tiny Wings has been doing some incredible things in the top paid charts in the US App Store. It’s been steadily climbing the last couple of days, and I was floored when I looked up and noticed that it had broken into the top 25 of total paid apps. It didn’t stop there, though, and shortly thereafter broke the top 10. I was genuinely amazed by this, but it still kept climbing. For most of yesterday it spent a lot of time in both the 3rd and 2nd top positions, dethroning top 3 mainstay Fruit Ninja and pushing past the incredibly popular Camera+ app.

And then it happened. The unthinkable. Tiny Wings took the top spot from the King of the App Store charts for nearly a year, Angry Birds. Many members in our forums were confident that this would happen eventually, and some felt that it could never be done, despite how good Tiny Wings was. It just didn’t have the brand recognition or marketing muscle to push it to the very top. It has happened though, and for one of the most unique, fun, and beautiful games I’ve played in a long time I think it’s well deserved.

This isn’t the first time Angry Birds has been knocked off the top, as several different games or apps have bumped it from its position over the past year. But usually it’s a short-lived victory, as within just a few days Angry Birds is right back at #1. We’ll have to see how long Tiny Wings can maintain it’s #1 status, but surely there has never been such an unknown IP with no marketing campaign whatsoever that’s risen in popularity as fast as Tiny Wings has.

Based on our review, the positive words of everybody who plays it, and this very article you’re reading right now, it should go without saying that you need to pick up Tiny Wings if you haven’t already.