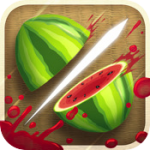 Fruit Ninja [.99 / HD / Lite] is a popular game. The touch-based fruit slicing joint has been downloaded to the staggering tune of six million times over its lifespan on the App Store. That’s a lot of fruit death, right? In fact, Halbrick has a number on said fruitricide: 150 billion fruits have met their Primordial Maker since the game’s debut.

In a recent press release, Halfbrick announced the following, an inarguably cute way to make “amends” for all the fruit death: its teaming up with the non-profit Fruit Tree Planting Foundation and sponsoring a fruit orchard in a low-income community in order to help the people there live just a tad bit better. Halfbrick notes that we won’t see the…fruits…of their charitable donation just yet, but it’ll keep an eye on the orchard and give updates about it on its Web site.

Question: surely billions of aliens have been killed in the DOOM series to date. What can id Software donate to the Martians? Less taxing Phobos teleportation machines? Cadavers?