In Japanese, the word Karoshi translates to “death from overwork”, which makes it an absolutely fitting title to They Need To Be Fed [99¢] developer YoYo Games’ newest offering. In Karoshi [99¢], you play as none other than Mr. Karoshi who is stuck working long hours at a job he hates in hopes of getting a promotion. This work-related stress has finally got to him, and he spends all his time dreaming up different ways that he could end it all.

You may have come across Karoshi in various forms as a PC or Flash game over the past several years, and it appears that the content in this new iOS version differs from the others. Each of the 50 levels in Karoshi look similar to your average 2D side-scrolling platformer, though instead of actually reaching the end of a level, the goal is to figure out how to kill poor Mr. Karoshi, which is not quite as easy as it sounds. 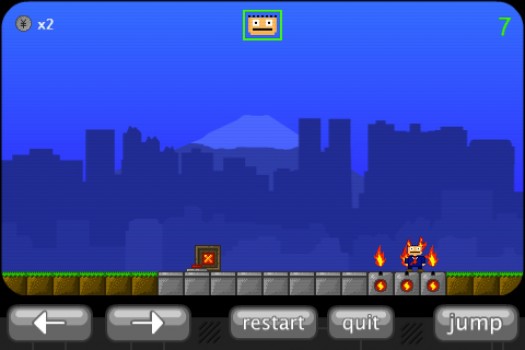 You can move Mr. Karoshi left or right and jump using onscreen virtual buttons. There are boxes that can be moved and switches that can be activated, which will do things like trigger flames or electricity in the ground or make once solid platforms disappear. These hazards, along with touching any spikes or being struck with objects, can quickly end Mr. Karoshi’s fragile existence. The levels are set up so that you must find out how to use these instruments of death to put Mr. Karoshi out of his misery.

There are also two characters who will affect Mr. Karoshi in different ways during the game. One is his wife, Mrs. Karoshi, whom he loves dearly. Coming into contact with her elates him, giving him the ability to jump much higher and rendering any spikes in a level into harmless flowers. The second character is Mr. Karoshi’s boss, whom he hates with a burning passion. Coming into contact with him depresses Mr. Karoshi, causing him to not be able to jump as high as he normally could. At certain points in the game it’s even necessary to control these characters directly to accomplish your goal. 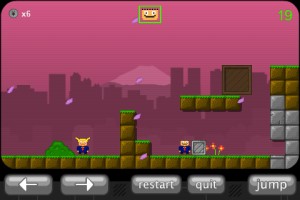 What makes Karoshi so downright awesome is how you must take all of these factors into consideration in order to beat the game’s levels. Karoshi is more of a puzzle game than anything, with platforming as its mechanic. Some of the levels are fiendishly difficult too, often with the answer blatantly staring you in the face the entire time. Finally figuring out a tricky level is extremely gratifying though, and you’ll often sit back and marvel at just how clever some of the level designs are.

There’s also an additional mode aside from the 50 level Story mode called KaroshiWare. As the name implies, it’s a WarioWare-type survival mode that features a random series of tasks that must be completed in rapid fire succession. After a brief countdown you’re presented with a simplified level setup and instructions to either kill yourself, survive, or not move at all. You’re only given 5 seconds to complete each bite-sized level, so you must react extremely quickly to the instructions. This mode is totally fun and a nice diversion from the main game, and could easily be a separate game itself.

Up to this point everything is sounding pretty good for Karoshi, but unfortunately there is a huge drawback to the game which is the terrible controls. They are among the most unresponsive and finicky controls that I’ve ever encountered on iOS. Due to the puzzle-like nature of the game, they are still serviceable as you don’t always need pinpoint precision to play. But they will still frustrate you to no end. I have uttered curse words I didn’t even know existed because of the poor controls. It’s strange too, because I haven’t heard anybody in our forums complain of this problem. Sadly, the control issue has turned what could very easily be one of my favorite games into a less enjoyable experience, and I’m really hoping it can be addressed in a future update.

Even with the problems with the controls, Karoshi is still a game worth playing. The fact that I’m willing to put up with such a frustrating complication is a testament to the quality of the game. The ingenious level designs and dark humor of Karoshi is worth occasionally fighting the controls for.

Update: For whatever reason, the control problems mentioned in this review have since disappeared. I persistently encountered these problems for several days before writing the review, and had tried a couple of things to fix the issue without success. Nobody else I had encountered seemed to have these problems, but I couldn’t in good conscience not mention my own experience in the review. Since the problem has sine corrected itself (though I still have no idea what caused it) I wanted to add a footnote to this review in case the control issue was scaring anybody off. I elaborate on the problem in this post in our forums if you’re interested to hear more.