Last month we went hands-on with Capcom’s mobile version of Devil May Cry 4. The game missed its intended late January release, but last week Devil May Cry 4 Refrain [$1.99] finally hit the App Store. In a post-Dead Space [$6.99/HD] world, where we’ve seen what is possible in bringing a console-like experience to iOS with an original storyline to boot, it’s hard to get terribly excited for Devil May Cry 4 Refrain. Story-wise it’s essentially a retelling of the console game with static cutscenes and text, and visually there is a lot to be desired. Still, the action is solid (though repetitive) and the virtual controls work really well. If you’re a fan of the Devil May Cry series and are looking for a version you can squeeze into your pocket, then Devil May Cry 4 Refrain satisfies.

The game takes place over 10 levels which each consist of interconnected areas which you must explore. The environments look decent but are barren and lack any sort of life or vibrance. The game description boasts Retina Display support, but honestly I don’t see it. The graphics are full of jagged edges and the text in the game is blurry and difficult to read. Overall the game certainly doesn’t look bad, but it could stand to look much better compared to other titles on the App Store. 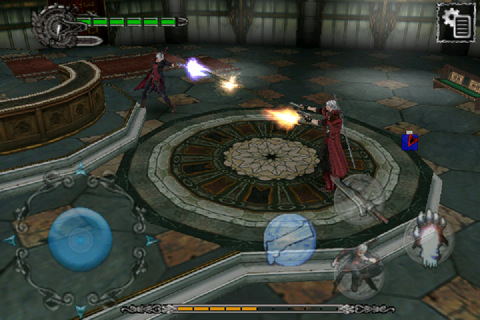 Graphics and presentation aside, the combat in Devil May Cry 4 Refrain is what really stands out. You control your character Nero with a virtual stick and an option for a 3 or 4 button setup. I suggest going with the 4 button setup that gives you a button each for jumping, shooting, swordplay, and using your Devil Bringer arm weapon. The simplified 3 button setup combines your gun and sword into one button, but takes away most of the skill of engaging in combat. 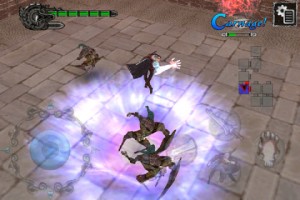 The Devil May Cry series is known for over-the-top combos and an emphasis on style, and this translates very well to the iOS version of the game. The actual mechanics behind the combos have been drastically simplified in order to work sufficiently with virtual controls, but the “feel” of the combat is still there. As you make your way through the game you’ll be able to unlock a plethora of new moves for all your various attack types. These can be configured to your liking in the settings, offering a small bit of customization to your character.

As neat as it is that the stylish combat of Devil May Cry translates well to the mobile version, it still has a tendency to feel repetitive and button mashy. In fact, the general nature of the game is quite repetitive. The core experience involves entering a new room, clearing it of enemies, and moving on to the next. This is broken up somewhat by mild puzzle solving and boss battles, but for the most part the game hardly ever changes. It’s also pretty light on difficulty and fairly short, as the entire game can be completed in just a couple of hours without much struggle. There is some replay value in going back to replay levels for a better score, but it’s insubstantial.

Despite the drawbacks and overall unambitious nature of Devil May Cry 4 Refrain, I can’t deny that I’ve had fun playing through it. Something about the combat is just really satisfying. Capcom has stated that there will be an update to the game adding Dante from the original Devil May Cry games as a playable character, which should address the current brevity of the game somewhat. Opinions of players in our forums are mixed, with some enjoying the game a good deal and some not at all. I think if you adjust your expectations accordingly, you’ll find enough to like about Devil May Cry 4 Refrain. At its current price of $1.99, it’s easy to recommend for fans of the series or action games in general.