Today Taito released a new entry to their Bust-A-Move series (known as Puzzle Bobble outside the US) into the App Store called New Bust-A-Move [$4.99]. It’s a sequel of sorts to their original iOS version of Bust-A-Move that was released in 2009, and features a host of new gameplay mechanics that warrant the “new” in its title. It’s a game that’s filled with content and fun ideas, and despite several drawbacks New Bust-A-Move is a welcome addition for fans of the series.

New Bust-A-Move takes this formula and uses it in some clever ways. Some levels have you rescuing a bird by popping all the bubbles that are chained to its feet in order to set it free, or trying to clear the field as a monster is constantly swooping in adding random bubbles into the fray. These level types mix up the gameplay nicely, and each sub-section of the game’s campaign ends with an interesting boss fight. This is all complemented with numerous types of bubbles with special properties, like exploding bubbles or ones that clear all bubbles of a certain color when matched, further adding to the strategy and variation. 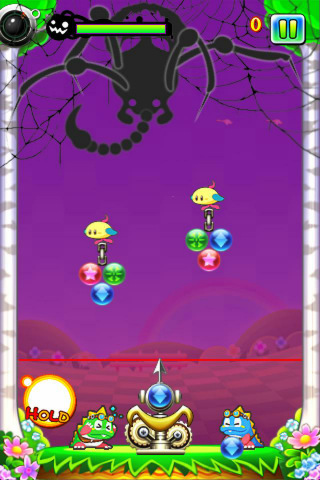 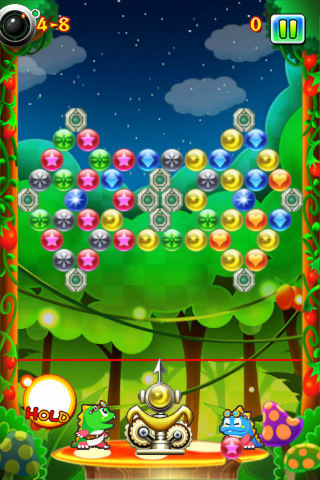 One big new addition to New Bust-A-Move is the Jump Shot. Holding down on the launcher for a few seconds will produce a target that moves back and forth along the path of the launcher. Launching the bubble arcs it up and over into the play field where the target was placed, allowing you to plop a bubble down into a spot that would normally be inaccessible with a regular shot. This mechanic is pretty interesting and adds a brand new strategy to the tried and true Bust-A-Move gameplay, though it’s difficult to use in an effective way consistently.

Two minor issues that stuck out about New Bust-A-Move are that the game is not optimized for Retina Display or fast-app switching. Not a huge deal, but annoying nonetheless. The far greater problem is the imprecise controls. Bust-A-Move games rely on pinpoint accuracy and the touch screen just does not afford this. This is compounded by a horrid guide arrow that stems from your cannon that is too thick and not an accurate representation of where your bubble will go. An option to adjust the sensitivity of tilting your cannon or an alternate guide arrow (or the ability to turn it off completely) would do a lot to improve the experience, but sadly no such options exist.

These control issues don’t render the game unplayable, but they create more frustrating mistakes than you may be able to deal with. If you can look past this, there is a lot to like about New Bust-A-Move. There’s a full campaign mode with hidden unlockable levels and boss battles, and endless survival mode, and Game Center integration with online leaderboards and plenty of achievements. If an update ever comes down the pipe that offers Retina Display and multitasking support, along with options to adjust control and UI aspects, then this could be one of the best versions of Bust-A-Move available.