There are tons of different endless running games available in the App Store, and while the genre certainly wasn’t invented by Canabalt [$2.99] it sure seems to have exploded in popularity since that title’s release in October of 2009. Nowadays it’s hard to get excited about a new running game, much in the same way it’s hard to get excited for another match 3, doodle, or zombie game. It’s an overly-saturated genre, but every once in a while a new entry will emerge and do something that is just different enough to change up the gameplay in a way that puts a new spin on things. That is the feeling I had after spending time with 10tons’ newest title Grim Joggers [99¢].

The hook in Grim Joggers is that you are actually controlling multiple running characters at the same time. You start out with 15 joggers in a line, and you can jump or double jump by tapping anywhere on the screen. The lead jogger will jump immediately upon tapping, with the rest of the crew following in a staggered fashion. The goal is to run for as long as possible through randomly generated levels while avoiding a plethora of hazards and dealing with a steadily increasing speed. Inevitably you will lose members of your crew to these hazards, but play will continue as long as at least one of the joggers remains alive. Once everyone has given up the ghost, though, the run is over. 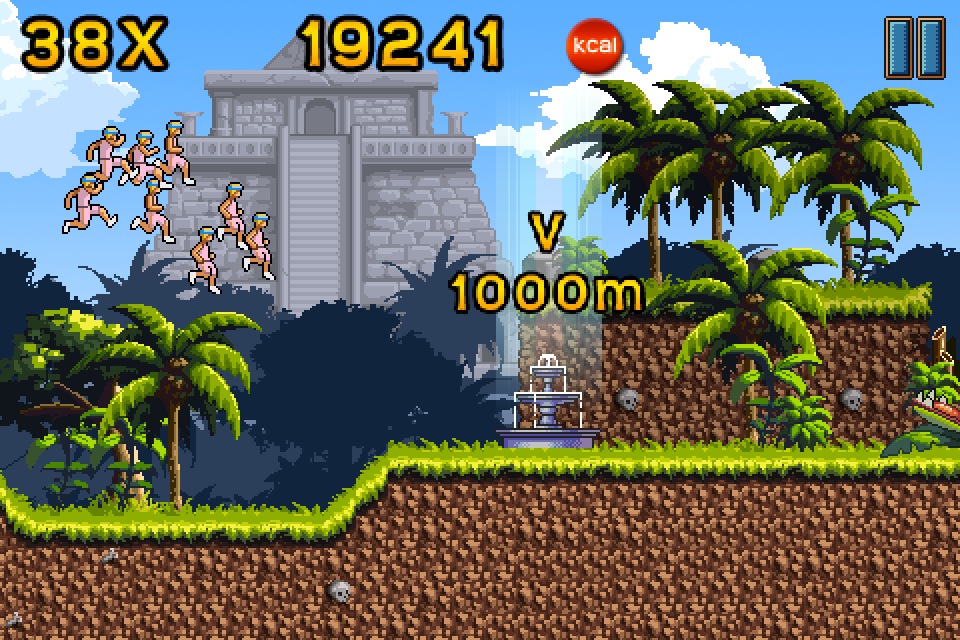 The multiple jogger aspect may seem like just a gimmick, but it actually completely changes the typical approach to this sort of game. Normally you would just immediately jump every gap or hazard that comes your way without much thought. In Grim Joggers, however, you have to consider the entire line of joggers – where each of them are when you jump, where they will land, and what sort of hazards will be in their way next. It’s a subtle change from the norm, but it impacts the gameplay in a significant way. I really like having to actually make strategic decisions and pay attention to everything that’s going on while playing, rather than just blindly reacting to a level’s challenges. 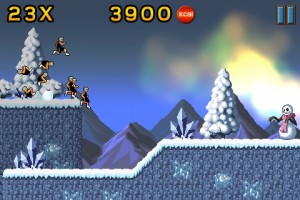 Heightening this evolved gameplay is an excellent scoring system that is the real heart of what makes Grim Joggers so much fun. Points are accrued as you run, and at set intervals there are checkpoints. The amount of joggers in your crew when you pass through each checkpoint adds to a scoring multiplier. Needless to say, it’s in your best interest to have as many joggers alive as possible for each checkpoint if you want to reach any kind of meaningful scores. This, coupled with the need to play smart and pay attention, creates some pretty compelling gameplay and is what sets Grim Joggers apart from other running games.

Visually, Grim Joggers utilizes a colorful pixel style that won’t blow your mind but does look quite nice. There are all manner of gruesome deaths awaiting your joggers, from man-eating plants to explosive barrels to polar bears ready to maul you. It’s a tad on the gory side, but done in a humorous way, and there is an exhaustive amount of funny statistics and facts tracked throughout the game as well. Three different environments are available to unlock and play through, with a fourth level apparently coming soon. The pacing of the game is really well done too, and there are a ton of achievements to earn and high score tracking through Game Center.

Grim Joggers may be yet another running game, but it brings a few different twists to the genre that put it in a category of its own. The fantastic scoring system and randomly generated levels give the game a ton of replay value. The only thing I came across that I didn’t like about this are the sometimes unfair placement of hazards due to the randomly generated nature of the levels. These occurrences are pretty rare, though, and don’t hinder the overall experience. There’s a discussion thread for the game in our forums with further impressions, and even if you think you’ve had your fill of endless running games, Grim Joggers is still worth a look for its different take on the formula.