I struggle to find a mechanic or point of level or enemy design in The Flying Hamster [$5.99] that I can use to put the game on a pedestal, to show you that its better than the rest of its side-scrolling, shoot ‘em up brethren on the App Store.

I find myself in this backbreaking dilemma because the game is so goddamn cute — it’s so full of life, character, and expressiveness, that I’m compelled to justify my adoration of it by conjuring positive opinions about its design that just aren’t present. 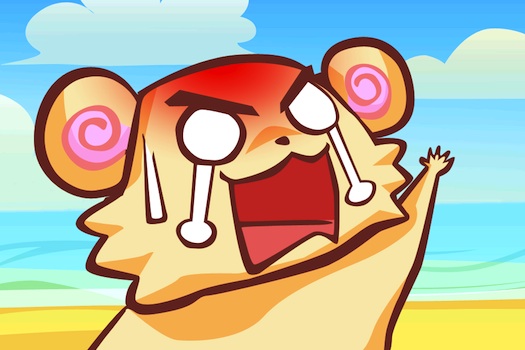 The experience is basic. You control an avatar with a limitless primary attack against a diverse range of enemies, each type possessing a unique range and rate of fire. Your goal is to reach an endpoint, to successfully navigate a storm of bullets and enemies to some arbitrary destination guarded by a bullet sponge of a boss.

Your ability to recognize and memorize patterns is the difference between success and defeat. Enemies, including bosses, aren’t erratic — enemies are scripted and each level plays out the same, which is a good thing considering that there are no checkpoints. 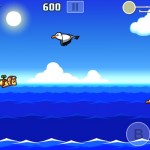 But here’s the deal: all of this simplistic, generic stuff is awash in color, inspiration, and genuine character. Your avatar is an anthropomorphic hamster that can fly. Your enemies are penguins floating down from the heavens while shooting rounds from their hand cannons, angry rams, seagulls, cuddly vampire bats, and red scorpions that shoot pellets out of their venom-laced tails. Your weapons are your own loogies, streams of root beer, and seeds.

And the expressiveness! Each level is capped by a cut-scene of this adorable hamster created in a Japanese style that emotes a bright and cheery tone that flows into the level design, the equally upbeat audio, and the boss fights. 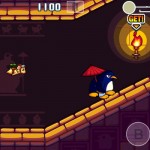 The character, I think, hides something a little more feral than you’d like — The Flying Hamster doesn’t give you many opportunities to continue. You start the game with five lives and it ends after you lost them. Plus, the points you accumulate are based on what you scored in a single life; it’s not cumulative.

The controls can be a point of frustration. The standard layout gives you the ability to move your character wherever, no matter where your finger is on the screen, which is a nice touch… whenever you’re not inadvertently hiding an enemy with your flesh. Those times, however, are few.

But while that controls and difficulty can be a bummer considering how little this game gives you to work with in terms of chances and tools to succeed, I feel like its art and character triumphs. Sure, The Flying Hamster is not even close to being the best shoot ‘em up available on the App Store, but it’s one of the best-looking and most artistically inspired of the bunch. Give it a shot if you don’t mind routine design or a challenge. Or if you’re into looking at cute animals.