Today Joystiq caught wind of a cryptic teaser site for a Japanese mobile phone port of Chrono Trigger, which is yet another classic 16-bit era RPG by SquareSoft. The site itself isn’t home to any more information other than the Chrono Trigger logo and “Spring 2011." Chrono Trigger was a remarkable RPG that had many revolutionary systems such as time travel, multiple endings, and other things not previously seen on home consoles. (For a full rundown, check out the extensive page on Wikipedia.) 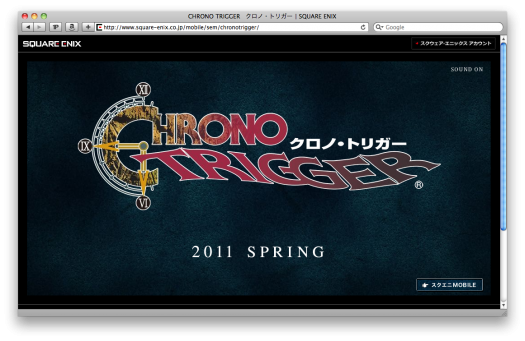 We’re not sure just yet whether this means the game is coming to Japanese mobile phones, the Japanese App Store, or anything else other than it’s coming to mobile platforms in one way or another next year. However, with the success Square Enix has seen with their titles on the App Store, I’d find it to be almost impossible to believe that Chrono Trigger wouldn’t eventually end up running on iOS sooner or later.