Here’s a neat one. The creative nucleus of Infinity Blade [$5.99] was originally concieved as a Kinect title instead of an iOS game. Game creator Chair Entertainment’s co-founder Donald Mustard explains in another delicious Joystiq interview post.

“We always have some cool ideas on deck, and kind of the inception of Infinity Blade began as a discussion around: ‘If we were going to make a Kinect title, what would we make? What would a Chair Kinect game look like?’," he said.

“That discussion happened, you know, a year and a half ago. We had this really cool design, and it’s not that dissimilar from the game you’re playing today; it’s just been refined and adapted to the iOS screen, which honestly I think is where the design works the best. " 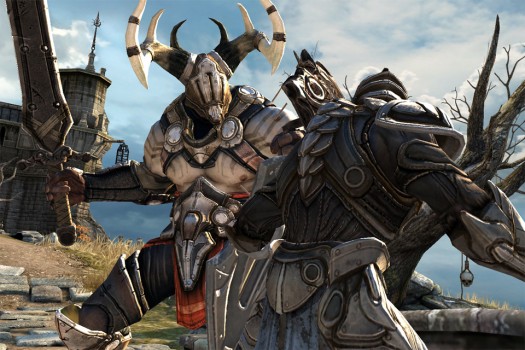 Mustard neglected to get specific about what ideas were being thrown around in these conceptual stages of Infinity Blade, but theoretically, a Kinect version of the action RPG would have you acting out the sword swings and parries and near-miss dodges with your body and arms instead of your fingers. It’s a neat idea, and what’s wild is, it could totally work. Kinect fairs best with broad, sweeping motions such as a pretend sword slash. But that’s not to say Infinity Blade sucks on the iOS. It’s, as we’ve said before, a fantastic Chair joint.

The kicker here is that even though plans changed for Infinity Blade, a Kinect version could still happen. “Yeah," other Chair co-founder Geremy Mustard told Joystiq, “if the Kinect really takes off over the holiday season, who knows?"

Who knows, indeed. Maybe I’ll actually turn on my Kinect again if Chair decides to bless it with the gift of Infinity Blade.