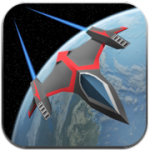 Any App Store gamer will tell you that there is no lack of iOS space shooters available. To be perfectly honest, when I first caught sight of the upcoming Red Nova [99¢] from Celsius Game Studios, the developer of Chromodyne [99¢/Lite/HD], it didn’t look too different from any of the games that I had seen many times before. But after having a preview build of the game on my device for the past couple of weeks, and with the full version now available, it’s clear that Red Nova actually does quite a few things to set itself apart from the pack. It has an interesting premise, one of the smartest control schemes I’ve seen, Game Center integration for high score bragging rights, and above all else it’s just a blast to play.

The story goes that a hostile group of aliens is getting ready to invade your territory, but fortunately they have yet to notice the existence of your spaceship headquarters the Red Nova. Not so fortunate is that if Red Nova fires up its engines in an effort to bolt on outta there, the aliens will surely notice and blow it to kingdom come. Your job, as the brave female lieutenant Jules Morgan, is to distract the incoming aliens long enough to give the Red Nova a chance to escape and warn your people of the looming attack. It’s basically a suicide mission, but in the process you’ll save the many lives of the people on the Red Nova. 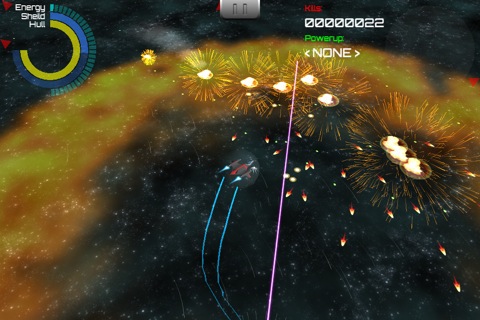 The story is a pretty cool way to put what is essentially a survival shooter into a believable context. Red Nova plays similarly to Asteroids in that you have to compensate for your ship’s inertia, which will carry you infinitely in the direction you’re moving until you change that direction yourself. The controls are absolutely spot on, and the way they are implemented is really clever. The screen is split into 4 equal quadrants. The lower left is a virtual stick that controls your ship’s forward movement and turning. The lower right quadrant is a fire button, but you can also slide your thumb up from there to use a special weapon or to the left to lock on to enemies and fire homing missiles at them. 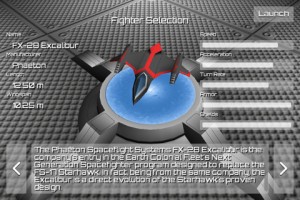 The special items and homing missiles require using energy from a meter which is filled up as you defeat enemies, so as to balance out their use. You can also use collected energy to directly repair your shield by tapping and dragging the upper left quadrant of the screen, or a similar gesture can be used in the upper right to turn an unwanted special item into a small amount of energy. The use of the energy bar adds a strategic element to Red Nova, as you have a choice in how to manage your different resources and can use this to get out of tight situations. Should you use your energy to detonate a bomb and take out a screen full of bad guys? Or maybe use the energy to repair your ship’s hull and try to last just a bit longer using your regular cannons?

These kinds of decisions coupled with excellent controls and a frantic pace make Red Nova a complete joy to play. It is not a visual juggernaut by any means, but it does have a crisp and clean look to it, and supports the Retina Display. The real standout part of the graphics is the excellent design of the different enemies, who come in all sorts of shapes and sizes and each have their own unique way of attacking that you must familiarize yourself with. Red Nova is a pretty difficult game, even on the Normal setting, which actually suits its high scoring nature and pure arcade-style gameplay. Just be aware that you will need to spend some time playing before you become fully comfortable and start making some decent scores.

What I really like about Red Nova is that it doesn’t try to do everything under the sun, but rather focuses on one thing and does it really well. In this case it offers some of the most fast-paced arcade survival shooting around, and has finely tuned it with a number of different gameplay elements to make the action interesting and fun without being overwhelmingly complex. There is a great foundation in place if additional modes or mechanics are introduced down the line, and indeed the official name of this release is Red Nova: Episode 1 so that is likely in the cards. For now, if you’re looking for a nice take on the Asteroids formula, don’t hesitate to give Red Nova a look, and swing by the forum thread for a discussion of the game.