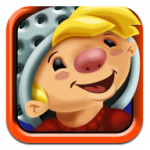 The App Store can be a silly place. Looking over the past year in games, trends have become incredibly apparent. One developer releases a hit game, which then causes everyone else to take notice, often using that hit title as inspiration for their own project. We’ve seen it time and time again, and even Imangi Studios’ previous chart-topping game Harbor Master [$1.99 / Free / HD] leaned heavily on Flight Control [99¢ / HD] for the basis of their own twist on the line drawing genre.

When we first saw Max Adventure [99¢], it was in secret at GDC at a time when it seemed like everyone and their grandmother was hard at work making a dual stick shooter. The game showed some serious potential, but I had no clue how Imangi was going to compete in the increasingly crowded dual stick shooter market and how Max Adventure would stand up against the onslaught of similar games of better and better quality. It turned out that Imangi’s strategy (whether intentional or not) was to simply focus on the development of their game and let everyone else move on to the next trend on the App Store. 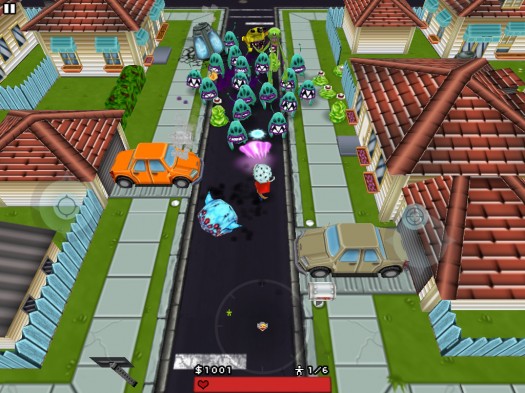 Now that many developers have moved on to making their own spin on Angry Birds, it’s oddly refreshing to play a new dual stick shooter. It’s a weird feeling, as I clearly remember how tired I was of the seemingly endless supply of dual stick shooter releases, and how much I dreaded attempting to review them. I’m really not sure what I would have thought of Max Adventure had it been released sandwiched in between Minigore [99¢ / HD], Guerilla Bob [$2.99], and others… But months later, it’s great to once again revisit a game type that works very well on the platform.

The premise of Max Adventure revolves around an alien invasion, and you play as Max, a kid armed with a ray gun and a colander for a helmet. Your task is simply enough, and only involves saving the world. The game opens in Max’s neighborhood where the mechanics you’re going to be dealing with for the rest of the game are clearly laid out. Max Adventure controls just how you would expect a dual stick shooter to control, and in the middle of the two virtual thumbsticks is a radar screen that shows nearby kids to rescue, the level exit, and potentially even more depending on what upgrades you buy (more on that later). 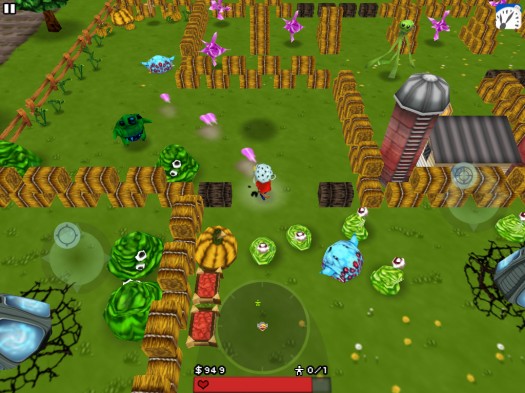 Progressing through the game involves rampaging through maze-like levels where you’ll need to do things like simply find kids and touch them to save them, escort kids, fight bosses, and more. Enemies spawn from pods that drop from the sky, and there is a wide variety of aliens that emerge that all behave differently for you to kill. Some aliens split in to smaller aliens when shot, some charge at you, and some bounce around among other techniques to kill you and/or avoid your ray gun. As you destroy baddies, power-ups are dropped which are then activated by tapping their icon on the top right corner of the screen.

Max can hold on to one power-up at a time, and these will do things like increase your firepower in many different ways, blow up all nearby enemies, make you invincible, heal you, and much more. Aside from power-ups, enemies also drop coins which can then be spent on permanent upgrades for Max. The upgrade shop is accessible in between levels, and by forking over your hard earned coins you can buy passive bonuses such as slowly regenerating health, running faster, having pods show up on your radar, and other things. Once you unlock them, Max has three slots for these bonuses, and figuring out which three you want adds a fun level of depth to the game. 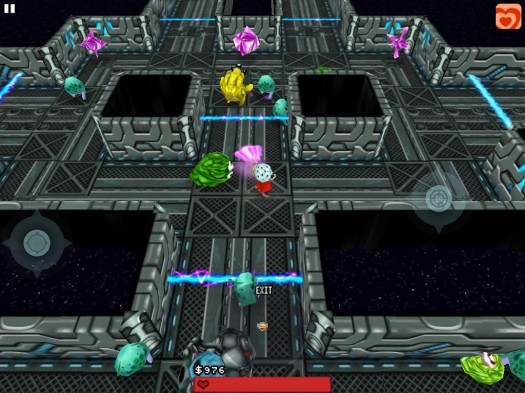 The best part about Max Adventure is that it never really feels repetitive, which has been a major problem for me in many dual stick shooters where all too often exploration and customization takes a back seat to just killing everything that moves. The whole game is set in this extremely cute almost Zombies Ate My Neighbors-like kid-centric universe filled with cartoon style 3D graphics and the music does a fantastic job at setting the mood of the game. Aside from gearing up Max, you also get a good sensation of progression as you make your way through various locales until you’re finally on the alien mothership itself.

Better yet, Max Adventure is totally universal and comes packed with Retina Display graphics. On the iPad, the field of view is pulled back a little bit allowing you to see even more of the game and the controls are slightly modified to be more iPad-friendly. Max Adventure isn’t limited to the story mode either, there’s also a familiar survival mode where you (obviously) see how long you can survive wave after wave of aliens. Max Adventure controls well, plays well, runs great, and the multiple game modes along with universal compatibility is the cherry on top of an already awesome iOS gaming sundae. It even has Game Center for both online leaderboards and achievements if that’s your kind of thing.

Max Adventure is launching for the temporary price of 99¢. If you’re like me, and built up a love/hate relationship with dual stick shooters as the market became more and more inundated with them, Max Adventure is a fantastic foray back in to the genre.