If you are one of the many people who thought that Real Racing 2 had stolen all of Firemint’s time and they were no longer focused on delivering the promised Real Racing [$4.99] multiplayer update, you’d be right, to some extent– As it’s already completed, and in Apple’s hands awaiting approval. The flurry of excitement this morning that resulted from the flood of new information on the game’s sequel seemed to cause everyone to miss the following tweet by Firemint: 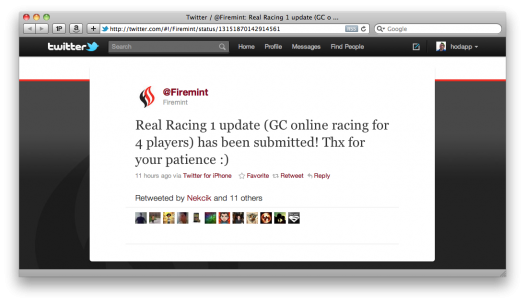 Now, it’s really hard to say when this update will land in our greasy little hands. We’ve heard from several developers that the cutoff for approvals before the Christmas iTunes Connect freeze was anywhere between Thanksgiving to the 1st of December, but this is Firemint we’re talking about here. It wouldn’t really surprise me if the update wasn’t approved until after the holidays, but at the same time, it also wouldn’t surprise me to find out that Firemint has a direct line (read: bat phone) to the person responsible at Apple for pulling the massive lever labeled “approve" inside their Cupertino fortress.

I wish I had more details than what has already been revealed, but I mostly just wanted to raise awareness of the impending update. I’ve got my fingers crossed it drops soon, as I can’t think of much reason to invest much time in playing Real Racing 1 online if the update appears after the release of Real Racing 2. 4 players hardly seems that exciting anymore in the shadow of massive 16 player online races.