2D Boy’s World of Goo has a ton of history behind it. It was originally released completely DRM and license-free for the Mac and PC (as well as the Wii nearly a year later) and saw amazing reviews from the gaming press. This is where you’d expect the story of the game to then end in 2D Boy making tons of money and everyone living happily ever after, as PC gamers are constantly harping on developers about restrictive copy protection (like StarForce) or cumbersome CD key systems is what drives them to piracy. Sadly, not long after its release, despite all the critical acclaim and awards, 2D Boy’s publisher filed for chapter 11 bankruptcy as only 1 out of 10 people playing World of Goo had paid for it. 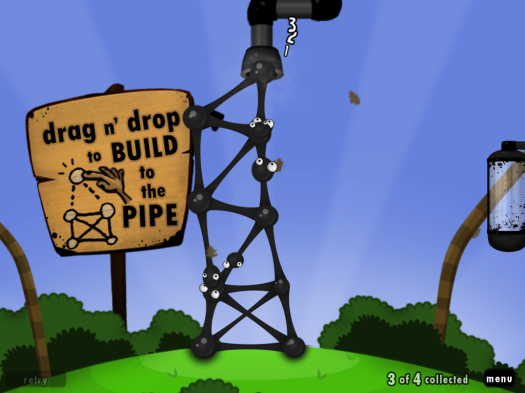 The good news despite all that is 2D Boy is still around, and they’ve been hard at work on an iPad version of World of Goo that’s scheduled to launch on December 16th for $9.99. If you’ve never played the game before, you’re going to be in for an absolute delight. The goal of each of the levels is to use the various goos to construct structures to reach the end pipe of each level where they’re sucked up in to a huge tank. It isn’t a new gameplay mechanic at all, as tons of developers (even on the App Store) have built strikingly similar structure building games before.

Where World of Goo pulls ahead of the pack is in its remarkable presentation. Everything in this game flows together flawlessly, from the difficulty curve to how the graphics combine with the music, to the various silly cut scenes and introductions of new goos, and more. This is all enhanced by the new multitouch interface which allows you to drag around multiple goos, build and move the camera at the same time, and more. It feels so natural that I’m not sure how I played the game with a mouse before.

Next week is going to be insane with even more pre-holiday releases than today, but if you own an iPad, make sure you save ten bucks to download World of Goo. Even if you’ve played through it before, it’s such a substantially different and better experience on the iPad that I cannot recommend it enough.