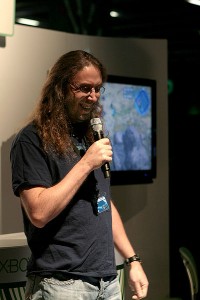 According to Kotaku, gaming guru Graeme Devine has left Apple. Devine got his start in development in the late 70’s on the TRS-80 before being hired at the age of 16 to work at Atari, helping to bring Pole Position to various home computers including the Commodore 64 and Apple IIe. From there, he went on to co-found Trilobyte Games which then went on to release both The 7th Guest and The 11th Hour. After leaving Trilobyte, he worked with Id on many games, including Quake III Arena and Doom 3. More recently, he was lead designer for Halo Wars, an RTS set in the Halo universe.

At Apple, Graeme held a key position making sure that gaming on iOS devices was as good as it could be. In an interview with Kotaku, he explained some specifics of his responsibilities:

“My job there was basically to make gaming on the iOS devices fantastic," Devine said. “Basically that meant looking at the technologies involved and making sure the software played well with the hardware, to look at upcoming hardware/API and say ‘Yup, that is a good thing’.

“Apple didn’t have an in-house game designer before me so I think it was pretty unique, game technologies touch everything from the graphics stack to touch latency to push notifications. No other app type covers so many technologies and having someone there to validate and help shape that was basically my day job. It was pretty kick ass."

His reasoning for leaving Apple lies in his desire to return to game design, specifically targeting the iPhone and iPad. He even provided the following hint for his next title, which is going to be for the “Mac desktop".:

We’re not sure if this means it will be appearing in the Mac App Store or not, but we hope so. Either way, we’re sad to hear that Apple has lost such fantastic game design talent, but at the same time it’s great to hear that Graeme Devine is getting back to building games.