Seeing as our little Apple devices have such fantastic touch screen keyboards, it only seems natural to utilize this as a play mechanic in iOS games. We’ve previously seen this done successfully with games like Texting of the Bread [$1.99/HD] and Font Monsters [$1.99/Lite], and at a recent EA Mobile event I had the chance to try out a new game called TxT Fighter that also utilizes typing as its core gameplay.

Developed by 5 Elements Entertainment and published by Chillingo, TxT Fighter takes all the core elements of a one-on-one fighting game and replaces the button mashing with keyboard mashing. You’ll choose from 7 different characters and 7 environments to fight in through a single player arcade mode or local multiplayer using Bluetooth. 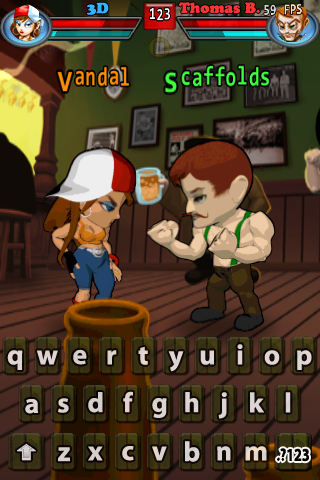 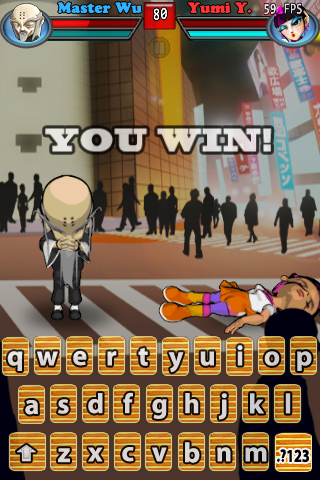 When the battle begins you’re given two words on screen, one for a punch attack and one for a kicking attack. There’s no backspace button, but each incorrect letter you type will decrease the amount of damage that particular move will do. Each character has two special moves that can be used by filling up a blue meter below your life bar and then typing out an alternate, more difficult version of a word that appears below the original.

I went a few rounds against the developers of TxT Fighter and have to say that the whole concept works really well. There have been some decent iOS fighting games released, but they are always held back by the lack of precision found in virtual controls. In TxT Fighter this isn’t a problem as you’re only bound by how well you’re able to type on the keyboard.

Panic sets in as you frantically try to type a word correctly before your opponent does. A decent amount of strategy is involved as well as you try to make split-second decisions whether to go for the easier words that do less damage or try to fill your special meter and bang out a more complex word and go for a knockout.

The single player mode will offer a nice progression as you unlock new abilities for the fighters as well as follow along with an interesting storyline. The Bluetooth multiplayer connected quickly and the connection felt solid, and of course it’s always more fun to play a game when you can talk smack to your opponent’s face. In addition to these two modes of play, TxT Fighter will also offer two different mini-games that let you hone your typing skills in different ways, one of which has you beating up on a giant statue as it slowly crumbles and breaks apart à la the car smashing game from Street Fighter II.

TxT Fighter is scheduled to release this month for iPhone and iPod touch, with an iPad version in the works for early next year. In-depth character bios can be found on the TxT Fighter Facebook page if you’re looking for some more background information, and we’ll be taking a closer look at the game when it launches sometime in the next few weeks.