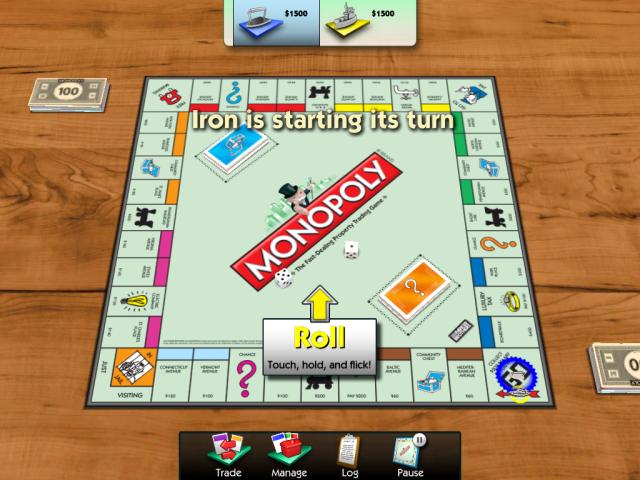 EA Mobile has already brought two successful versions of the Monopoly franchise to the iPhone/iPod touch, classic Monopoly [$2.99] and The World Edition [$2.99], but now it’s the iPad’s turn. Obviously the larger screen of the iPad makes for a more enjoyable experience with a virtual board game, but EA has also added a few interesting twists to the game to make it more than just a straight digital conversion. 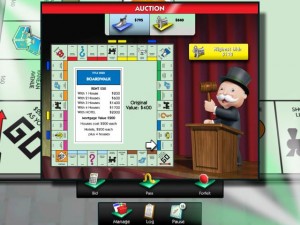 First of all, the other iOS versions of Monopoly are pretty hard. I’ve heard more than one player complain that the AI was “cheating” because they would get whooped badly so often. The iPad version looks to remedy this with Teacher Mode where you play a much friendlier AI, not just in difficulty but also in offering helpful hints and tips. The AI in Teacher Mode will pop up with information like which color properties get landed on the most so you can be sure to place hotels there, and in-depth statistics for both of you so you can see that the AI actually isn’t pulling a fast one on you by comparing how each other’s game unfolds.

The other great addition to Monopoly on iPad is Tabletop Mode where you can play same-device multiplayer with up to 4 people. What’s cool about this mode is that you can just lay the iPad down on whatever surface you want to play on, like a table, and the relevant text and UI will reorient itself around the screen towards each player while keeping the game board in the same spot. It basically feels just like playing the actual board game, only there is no money or pieces to manage and everything is automated for you. In fact I’d say this is the definitive way to play Monopoly, and the only people who will bother to bust out the actual board game anymore are the nostalgic types who want to remember what us old people called “tactile feedback”.

Of course Monopoly on the iPad will also contain plain old regular games with a myriad of difficulty settings, game options, and rule sets. You’ll also be able to play local multiplayer with up to 4 players using multiple devices over WiFi or Bluetooth, and in a nice touch the local multiplayer with be compatible with the iPhone/iPod touch versions of Monopoly. Board games have already proven to be a great fit for the iPad, and if you’re a fan of Monopoly but hate keeping track of all the pieces, or have an unnatural disdain for thin elongated boxes, then you’ll definitely want to check out Monopoly Classic for iPad when it releases sometime this month.