BREAKING: Kids like expensive electronics. ALSO BREAKING: Kids under the age of 13 want an iPad or an iPod Touch more than any other electronic this season, so says the survey masters over at Nielsen (a research company).

Within the next six months, 31 percent of the respondents (parents) of a recent Nielsen survey say they have an “interest" in picking up a iPad this season. The next highest item are computers and the iPod Touch at 29 percent.

The list that follows includes the Nintendo DS, the PS3, Microsoft’s hands-free controller, Kinect, and several other consoles, including other electronic items like TVs and E-readers.

Don’t just take it from me; gander at this pretty blue list: 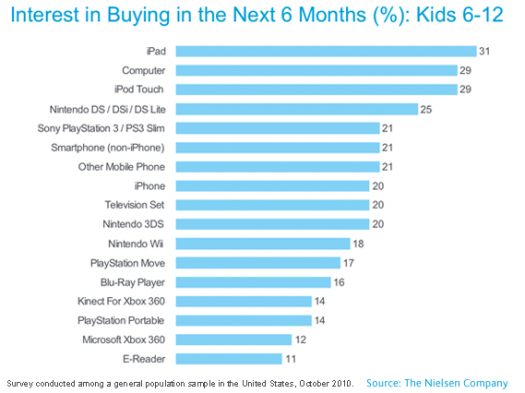 There’s a billion ways to analyze this bit of data. We could, right now, scream from our podium that iOS gaming is more attractive to kids than the Nintendo DS or the other “core" platforms. The data certainly looks like it supports that.

Or we could say that parents, who obviously answered the questionnaire that Nielsen blasted out, really want iPads and iPod Touches and wouldn’t mind using their really young kids as an excuse to buy one.

Or we could say that Apple has won the platform wars and will now forever since it has become, theoretically, the top dog among kids. These guys’ll grow up and evangelize and establish the norm, you know?

Or we could just look at this data and see that, at the very least, iOS is becoming a recognizable platform — one that kids under 13 are certainly excited about. Wait, that’s too rational. Forget it. Apple is winning the war against the old guard, guys! Nintendo? Who is that? A coffee maker manufacturer? Pfft!

But seriously, if you’re interested in this kind of stuff, swing over to the Nielson site and take a look at the second graph Nielsen has up. This one, for kids over the age of 13, looks more like a solid representation of electronic desires. According to it, teens are more interested in buying a computer or TV than an iPad or iPhone, though both Apple devices are still rather high on the list. Interesting stuff, for sure.