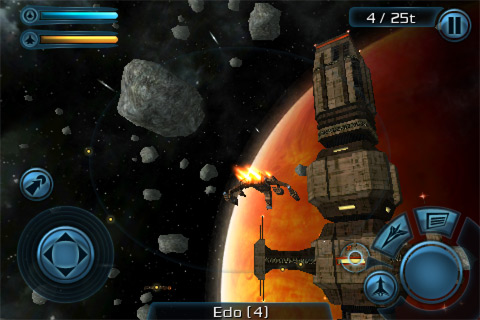 Back in March of last year Fish Labs rolled out their space trading title Galaxy on Fire, giving folks like me who missed out on the 1984 classic Elite a chance to make a name for themselves out there among the stars. It’s a great game that debuted with some difficulty issues, but they were resolved in short order and its universe has been enjoyed by many. Tonight, the studio released a new challenge for space jockeys everywhere, the sequel Galaxy on Fire 2 [App Store] for the iPhone, with an iPad version to follow close behind.

The game places you in the role of space fighter pilot Keith Maxwell who encounters a space anomaly and ends up adrift through the galaxy, to be rescued by a benevolent miner who helps you get back on your feet. You’ll quickly find you’ve not only been transported to to the other side of the galaxy, but that you’ve woken up 35 years in the future. Kind of like Sigourney Weaver. 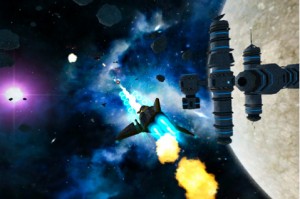 Your goal is to get back to your home system on the other side of the galaxy, but achieving that goal is going to take some time, and what better way to fill that time than by taking on various missions across the region’s 20 star systems. You start out with a relatively weak, modestly outfitted ship, but there’s money to be made and upgrades to be had along the way. Jobs ranging from cleaning up space garbage to mining asteroids to transporting goods to hunting pirates to rescuing kidnapped officers can be had in the various stations in each system on the vast star map. And, if that seems too harrowing, money can be made in the simple buying and selling of simple commodities from one station to another. Like father of the genre Elite, it’s a game you can take at your own pace.

Each star system consists of a handfull of planets, each with a space station — there are 100 in all — complete with a hanger in which to buy and sell goods as well as a Space Lounge. In each station’s lounge can be found individuals of many sorts, most of whom are eager to do business with you. Some want to send you to a neighboring planet to do their bidding, while others seek to send you to other systems much father afield, requiring a multi-leg journey across the star map, involving jumpgates that can send you to strange and distant systems. And all this against the backdrop of the tyranny of the evil alien race known as the Voids. 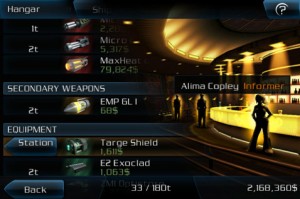 Seeing real success in the game required careful ship and equipment choices. For instance, some ships offer up the valuable contents of their cargo holds when destroyed, but without a pricey tractor beam, you can’t touch them. The same goes for asteroid mining — without the proper gear, that booty is beyond your reach. It’s all about successful missions and wise income management.

The game offers a choice of virtual stick or tilt-based controls with contextual action buttons to fire primary and secondary weapons. In addition, there are two view modes: standard and free view, which allows for swipe-based, any-angle  camera controls of the battlefield action with pinch and spread zoom support. The free view mode is an opportunity to partake in some real eye-candy, allowing you to contrive cinematic aspects through which to view the game’s impressive starfields and volumetric dust clouds which take advantage of the iPhone 4’s Retina display, where available. (And a different vantage can actually be helpful in a heated battle against a swarm of space pirates.) An option setting offers three different detail settings, the default being the highest on our iPad test system. 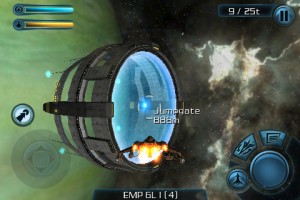 Hitting various gameplay milestones (returning to base nearly mangled, talking to more than 20 traders, etc.) will trigger in-game achievements, which are tied to integration with both OpenFeint and Apple’s Game Center.

While I enjoyed the time I spent with the original Galaxy on Fire, the sequel feels a more well-rounded and immersive. More polished. Everything just kind of flows together more smoothly this time around. And, while I’ve spent a significant amount of time with a pre-release build, I’ve really only scratched the surface of the gameplay the title has to offer.

The space trading / commerce genre is certainly not a sparsely populated one out there across the many available gaming platforms. And in the App Store, Fish Labs isn’t the only gig in town. But of the games of this sort I’ve spent time with, Galaxy on Fire 2 is the most approachable and satisfying on the platform, so I highly recommend it.