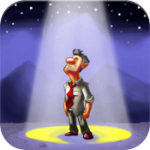 A couple of months ago we reviewed Big Bucket Software’s The Incident [$1.99], a fun, pixel-art packed spin on climbing games. That same review explained the basics of the game:

The main drawbacks of the original were lack of any kind of online scoring to speak of, no endless mode (an odd omission given the nature of the game), and even though it was universal, the tilt controls left a little to be desired on the iPad. All of these things have been fixed in this update. A new endless mode has been implemented, scores sync to Game Center, and they’ve even implemented a new controller mode to use your iPhone or iPod touch as a controller with the iPad:

There’s also some new objects to avoid, the game has been enhanced for the Retina display, and there’s even a whole pile of tweaks and fixes. Overall this is a fantastic update to an already great game. If you already own The Incident, download this ASAP. Otherwise, I’d seriously consider checking out our review and giving it a try.