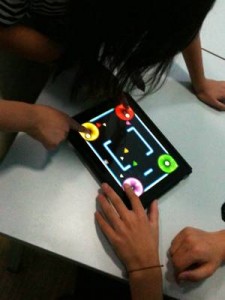 I must mention this in every post that has anything to do with single device iPad multiplayer, but two (or more) player games on the iPad are almost always universally awesome. Everything from elaborately crafted ports of board games like Small World [$6.99] to the simplest of games like Omium [99¢] are a ton of fun when played with another person. If for whatever reason you’ve disregarded my previous encouragement to try out two player gaming on the iPad, you really need to download any or all of VersusPad’s free games. They’re all fairly simple, but serve as an excellent example of just how well two player gaming works on the device.

Also, to make things a little more interesting, all of these games were developed in PhoneGap, a cross-platform development framework that allows developers to build their games in HTML and Javascript while still being able to take advantage of the core features of the device as a native app. If you’re great with Javascript/CSS, but bad with C++, PhoneGap is a free open source way for you to get started building games and apps on the iPhone. Anyway, on to the games-

Ogs, $1.99 [Gameplay Video] In this game, players dispatch creatures called “Ogs" to defend their own island and attack the opponent’s island. A bar at the bottom of the screen slowly fills up, allowing you to deploy more advanced Ogs. The game is over when either player’s island is destroyed.

The Roswell Game, $0.99 [Gameplay Video] Up to four players at once buzz around the iPad collecting crystals using virtual joysticks situated in each corner of the screen. The game is over when one player collects 75 crystals.

City Bucks, $1.99 [Gameplay Video] My favorite of the three, players place businesses on to an initially empty city grid to lure customers in to buy things. Earning money unlocks more expensive (and attractive) buildings. Monster attacks and disasters like meteor strikes spice gameplay up, and add an element of risk to saving up for one super-expensive business. I’d love to see this game concept fleshed out a little more, as it seems like it is on the verge of something really cool.