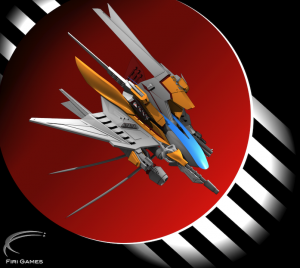 Earlier this month we took a look at the upcoming bullet hell shooter Phoenix from Firi Games. Phoenix claims to be able to push hundreds of bullets onscreen at a time and still run smoothly even on the oldest of Apple iOS devices. Firi recently sent us a work in progress build of the game and after spending some time playing it seems they are well on their way to bringing another solid entry into the shmup genre on the App Store. The preview build we were given is missing some key elements like music, some sound effects, and graphical variety, but the core of the gameplay is in place and it’s definitely a lot of fun.

Phoenix is a little bit different from other scrolling shooters in that there aren’t set levels. Instead, the entire game is an endless randomly generated level with a difficulty that scales based on how well you are performing. Think of it as the Canabalt [$2.99] of shmups. Controls are of the relative touch variety, meaning you can touch anywhere on the screen to control your ship instead of it always following closely to your fingertip. Defeated enemies will drop upgrades to your main weapon, health packs that repair your ship, temporary shield powerups, and a super weapon of sorts called the Alpha Strike Attack which gives your ship incredibly strong firepower for a limited time. 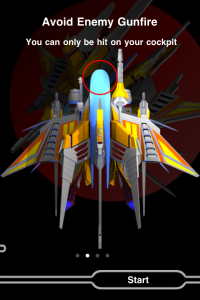 I was a bit skeptical about the scaling difficulty in Phoenix at first, but in practice it actually seems to work as intended. When you are doing well the game throws bigger and more difficult enemies at you who will fire faster and spray more bullets in your direction. Scoring also scales with the difficulty, which can be seen with a tiny meter next to your score display. As you avoid damage, the meter increases and so do the points you earn for defeating enemies. Due to this, you score doesn’t necessarily reflect on how long you survive in the game, but rather how efficiently you can avoid damage. Scores are tracked by an in-game global and regional leaderboard.

So far Phoenix has nailed the groundwork for an interesting take on the bullet hell shmup. Controls work well, and I was easily able to narrowly dodge the multitude of bullets being fired at me while simultaneously dishing out my own offensive onslaught. Visually Phoenix is looking very nice as well, although having only one scrolling background image got a little old. I’m told that this is something being worked on and there should be some more variety in locations in the final release. The leaderboards are also being tweaked, as right now they are somewhat basic and allow multiple entries per user which really clutters things up for such a high score focused game. Phoenix seems really well suited for something like Game Center, but it remains to be seen if the developer has any plans to implement this.

All in all I’m really impressed with what I’ve played of Phoenix at this point, and if Firi Games can polish up some of the rough edges in the game shooter fans can look forward to some bullet hell action no matter which iOS device they own. Firi had been shooting for a September release, so barring any unforeseen issues cropping up we should be seeing Phoenix arrive in the coming weeks. In the meantime you can follow along with the discussion for Phoenix in our forums, and we’ll take a closer look at the game when it hits the App Store.