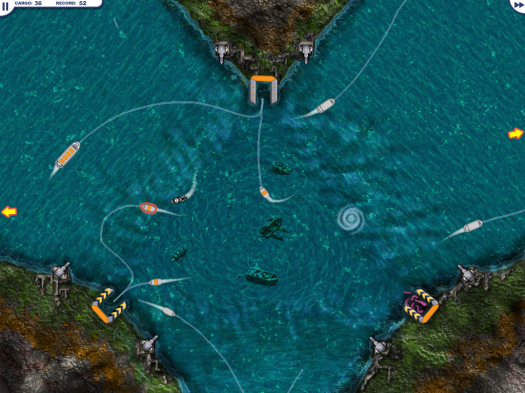 Imangi Studios’ Harbor Master HD has seen a number of additions since its original iPad launch in April. The base game includes a single map and can be downloaded for free, but they’ve since added four new maps for $0.99 each as in-app purchases. The map above is called the Bermuda Triangle and includes pirates, monsters and cyclones to make your line-drawing life a bit more difficult.

But with the latest updates, they’ve also added a clever rewind feature that lets you restart the game right before that last fatal mistake:

We’ve also added a really cool feature – rewinds. With rewinds, after you crash, you can choose to rewind (or undo) the crash, and continue playing where you left off. You can only use ONE rewind in a game, and you get a limited number of rewinds total. When we launched the update, we gave people 5 rewinds, and then they could earn 1 rewind for each 1000 pieces of cargo they ship. So they more you play, the more rewinds you earn, and therefore you can use a rewind more often. 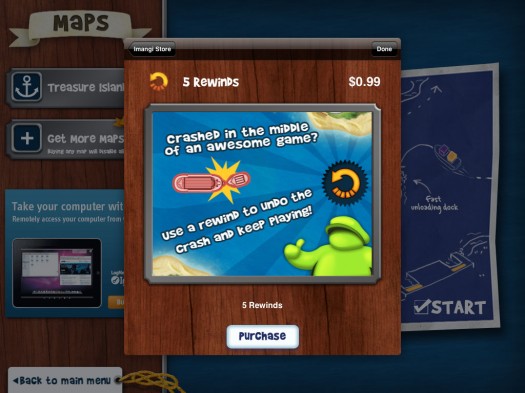 Balancing in-app purchases is always a challenging problem for a developer. On the one hand, in app purchases need to offer a legitimate value in a consumable product. But that product can’t be one that gamers feel is a necessary component of the game. I feel like the rewinds fill this sort of niche well, and I’d expect we’ll see it more often in the future. As an added bonus, I’ve always thought the compelling feature of these chaos management games is the “oh no!" last second regret when death comes suddenly. Now you get a second chance.