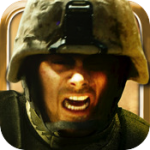 About a month ago, Gameloft’s N.O.V.A. [$4.99/Lite/HD] received a nice update adding high resolution graphics and gyroscope aiming for players of their Halo-inspired first-person shooter with an iPhone 4. Today, their Call of Duty-inspired shooter Modern Combat: Sandstorm [$4.99/Lite/HD] gets the same treatment with its new update. Our impressions for this new update are pretty much the same that we had for the N.O.V.A. update last month, and what was once old feels relatively new again. The game looks as crisp as ever on the Retina Display, and gyroscopic aiming allows for much finer precision while leaving your hand free to mash away at the fire button.

This new update isn’t the only news out of Gameloft today, as they have also released a teaser trailer for the sequel to Modern Combat: Sandstorm which is so far only known as Modern Combat 2. The trailer is, well, interesting to say the least:

Unfortunately the video doesn’t demonstrate any gameplay of Modern Combat 2, but it’s certainly good for a laugh, and it definitely makes me wish I had an iPad capable of shooting rockets (is there an app for that yet?). The video pegs the release for Modern Combat 2 as this fall, so most likely Gameloft will be offering more information and showing off the game in action in the coming weeks. Until then there is a discussion going in the Modern Combat 2 thread in our forum, and if you’re an iPhone 4 user or have an iOS4 device capable of fast app switching, make sure and download the new update for the original Modern Combat: Sandstorm and check out these new features.