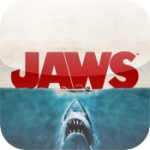 The dreaded curse of the movie game has been in existence since the 1982 release of E.T. the Extra-Terrestrial for the Atari 2600. Similar to many other famous curses, such as the curse of the Bambino or the curse of the Billy Goat, the curse of movie video games is just something you could almost always count on in that video games based on movies are generally mediocre if not much worse. In the rare instance that a game based on a movie isn’t terrible, it needs to be celebrated– And Jaws [$2.99] for the iPhone is cause for celebration.

If you somehow have never seen the movie Jaws, here’s the gist: Amity is a New England summer town with beautiful beaches whose local economy depends on tourism. Not too far in to the movie the bloody corpse of one such vacationer washes ashore and serves as the first clue that there may be something in the water. They suspect it is a shark attack, but the local mayor refuses to close the beaches as the 4th of July is approaching and doing so would be a financial disaster for Amity. Needless to say, they don’t close the beaches, Jaws attacks, and the rest of the movie involves the hunt for the massive shark. 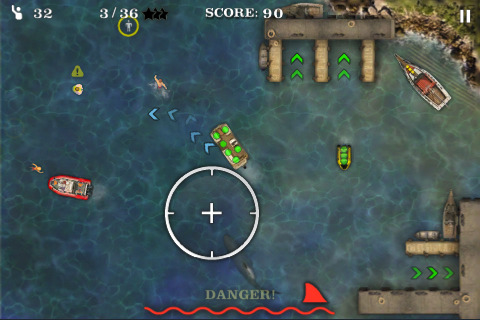 One of the most memorable things (for me anyway) from Jaws was the use of music in the movie. The iconic Jaws theme ramped up in the movie perfectly with the suspense of being on the open ocean looking for the massive shark, and the developers of the Jaws game have implemented this same audio cue in the game with the real Jaws theme… Which I feel really is the most important part of any Jaws-based game.

Gameplay amounts to doing everything you can to save the swimmers of Amity in a variety of different scenarios. Ten levels are included, and the early ones will just have you flicking swimmers to send them swimming towards the beach while avoiding Jaws who comes marauding through the water whenever the shark fin meter at the bottom reaches the swimmer icon. Eventually this makes way to open water levels where you’re able to flick swimmers around to avoid Jaws, and the only way to get them out of the water is by picking them up with boats that are controlled by drawing lines similar to Harbor Master [$1.99 / Free / HD]. There are also boats with guns on them that you target by dragging a crosshair around, and while I won’t spoil the end of the game, if you’ve seen the movie you can likely guess what happens.

While Jaws doesn’t really bring much new to the table, it combines gameplay elements that have been proven to work well with the touch controls on the iPhone in to a fun little game that really nails how a game based on the movie Jaws should feel. The later levels are downright frantic, and Jaws himself looks great– Especially when he leaps out of the water to turn a swimmer in to a pool of blood. Levels are scored based on how many swimmers you’re able to save, and each level has a limit as to how many Jaws can eat before you fail.

Jaws is a little light on content, with ten levels that shouldn’t take you more than an hour or two to play through and unlock everything. The game comes with OpenFeint integration for online leaderboards and achievements, but I really wish there was something more to do once you beat the game such as unlocking endless modes for each of the levels that allow you to play as long as you can before Jaws munches on a swimmer. Either way, if you enjoyed the movie, you’ll likely have fun playing through the game at least once.