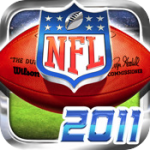 The newest iteration of Gameloft’s officially licensed football game NFL 2011 [$6.99] was released on the App Store this past weekend. While featuring a significant graphical update and some other enhancements, this new version appears to be largely unchanged from the NFL 2010 that was released a year ago. Not necessarily a bad thing, as we enjoyed last year’s version, but that was partly due to the “wow” factor of having such a comprehensive football game running on a mobile phone. Since that time, and especially with the release of the new iPhone, the bar of expectations for what is possible in a mobile game have been raised significantly. Because of this, NFL 2011 feels a bit underwhelming.

The improved graphics in NFL 2011 do look great though. The blocky and low-poly player models of NFL 2010 have been largely improved. What really stands out are the excellent animations in the game, replacing the somewhat stiff and repetitive animations from last year’s version. Players now exude a lot more personality with celebrations after what can seem like every play. It goes without saying that everything looks all that much better running on an iPhone 4. 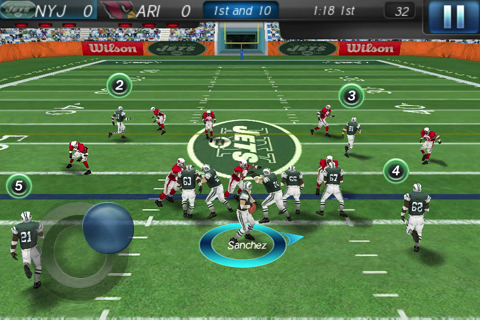 Another improvement in NFL 2011 is the move to replace some of the use of virtual buttons (which was complaint we had in the original game) with more natural iPhone specific controls. Certain moves will be performed with a tilt of the device rather than an onscreen icon, and kicking takes the form of swiping on the screen rather than the traditional power meter set with button taps. Also new this year are the addition of replays from the pause menu after any completed play and the removal of the “time freeze” element when dictating what actions your player performs on the field, which gives the game a much more natural feel.

NFL 2011 seems to be a decent package if you enjoy football games, and if you liked last years version then you should definitely enjoy this one as well. If you’re looking for a completely different experience, you’ll likely feel disappointed. Not coincidently, this release comes just over a week before the release of EA’s Madden NFL 11, which we recently previewed and is set to release on August 10th. Last year it seemed that all the positive reactions to Gameloft’s NFL entry were trampled by the bull that is the Madden franchise. We’ll see if history repeats itself next week when both NFL titles are finally available.