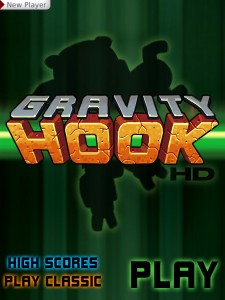 Semi Secret Software seem to be making a name for themselves as developers of games with great pixel art graphics, fantastic music, and high-score centric gameplay that in the case of Canabalt [$2.99] has kept me coming back for just one more try for the better part of a year now. Gravity Hook HD [$2.99] hit the App Store tonight, and provides much of what I loved about Canabalt, only in a vertical climb instead of a side scrolling run. In the game you play as a lovable little robot with a grappling hook who ascends to, well, wherever he’s climbing to, by grabbing on to a randomized series of orbs, reeling himself in, then flinging to the next one. Unlike Canabalt which you could hand to anyone with it running on your phone and say “tap the screen to jump," Gravity Hook HD has a bit of a learning curve as you get used to the physics of the game.

The different orbs you can latch on to have different properties, ranging from the green orbs which you can touch without issue, grey orbs which are chained together and fall if you hold on to them too long, and blue orbs which turn in to bombs and explode if you get near them. You’re also able to kick off the wall if you can swing your robot towards one, and mastering wall jumping as well as how to handle the different orb types are all required to get very far in Gravity Hook HD.

Just like Canabalt, Gravity Hook HD is playable in its entirety online for free in any browser with the Flash plugin. We’ve even embedded it below, just make sure you either have your speakers muted or are in an area where you can play sounds before clicking:

Gravity Hook HD is universal, and looks great on both the iPhone and iPad, although I’ve found myself leaning towards preferring it on the bigger screen. Scores are tracked online via Semi Secret’s proprietary system which breaks scores out in to top daily, weekly, and monthly submissions as well as the best scores of all time. Gravity Hook HD translates very well to touch controls, and while you can play the whole game for free with a mouse, it really is a much better experience with your finger.