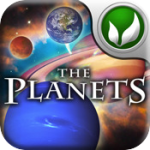 The latest game from development studio Appstar, founded by industry legends David Crane and Garry Kitchen, is called Fling Pong – The Planets [$1.99], and is an arcade game with an odd premise. In Fling Pong, you’re tasked with bouncing ping pong balls off the ground and landing them into a set of targets against a wall. The targets here are actually planets, and the concept is similar in a way to playing a game of skee-ball with the rolling of the ball replaced with bouncing. The presentation is really well done, with great looking graphics and excellent music, and altogether Fling Pong ends up being a simple but fun casual game.

The play field in Fling Pong is a small three dimensional room. On the back wall of the room are various planets from our solar system. Touching the screen displays a ping pong ball and a short downward swipe bounces the ball off the floor of the room and against the back wall. The object is to bounce the ball into the planets, with points awarded based on the size of the planet. This gets more complicated while the levels progress as the planets scroll across the screen at varying speeds or even move in a circular fashion, being larger the closer they are to you and smaller as they move farther away . Occasionally a planet will be lit up signifying that it’s worth double points if you happen to hit it during that time. 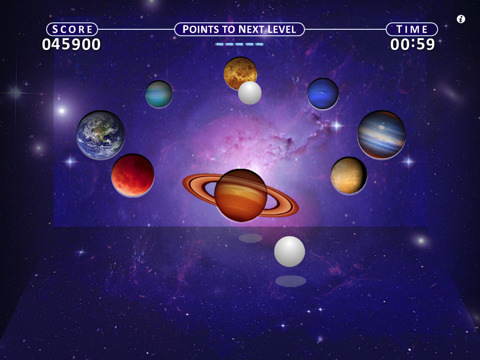 The gameplay is surprisingly fun as it’s a great feeling to bounce a ball just right and nail a tiny planet on the wall. There’s a set score you must achieve in a certain amount of time for each level, and a rocket bonus that can be earned which accurately shoots five consecutive balls into whichever planets you choose. The bouncing of the ball can feel ultra-sensitive, but this actually realistically conveys the near-weightlessness of a ping pong ball. My biggest issue with the game is it seems that some balls will go in when it appears you’ve hit the outside of a target, and conversely others seem to bounce right off even if you hit dead center. These minor issues don’t ruin the game though, and it’s still oddly satisfying to fling the ping pong balls towards the planets.

If you’re unfamiliar with Appstar, we detailed the formation of the company back in February and reviewed their inaugural iPhone game Iron Horse when it was released in May. We liked Iron Horse for it’s simple gameplay and authentic depiction of classic locomotives throughout history. Fling Pong is similar in that it uses a simple idea and high quality production values, with planet graphics that are actual photographs taken with the Hubble Telescope from space. Certainly a far cry from the many “doodle” games in the App Store, and I appreciate the realistic approach to the visuals (which look especially remarkable in the iPad version). Beyond that, Fling Pong – The Planets is also pretty darn fun, and with 32 levels, OpenFeint integration, and a phenomenal musical score, it should keep you entertained for some time.