If you’re like many people who have been anxiously awaiting upcoming top-down racer Reckless Racing (formerly Deliverace), then today brought about some good news. We previewed the game way back in the beginning of March, but the weeks just kept on passing by with no game release in sight. When developer Pixelbite suddenly went silent in the Reckless Racing discussion thread in our forums, we knew that something had to be up. Thankfully, what we’ve learned is that Reckless Racing has been picked up by EA Mobile and is still very much on it’s way to the iPhone and iPad. 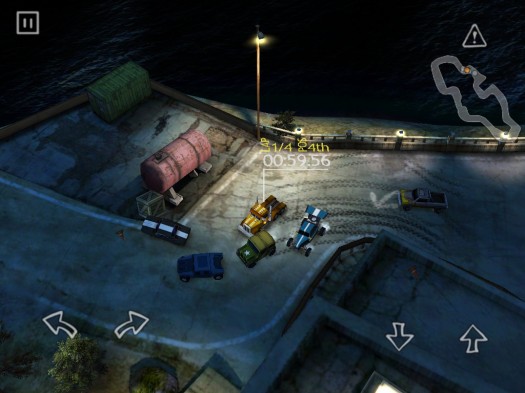 Here’s a screen from the iPad version and information given to us in the press release for Reckless Racing:

Roaring engines, squealing tires and amazing graphics. Reckless Racing mixes old-school top-down racing game play with state of the art graphics and engaging multiplayer features. Perfectly balanced controls let players skid, slip and slide through the most beautiful tracks ever seen on a handheld device – leaving nothing but mud-splattered opponents and skid marks behind. Reckless Racing features a fully stocked internet multiplayer mode, on-line leaderboards and the ability to trade ghost races with other players from all over the world.

EA pegs the game’s release date as Summer 2010, so by our best estimation if it’s not out by the end of this month, then it should be coming sometime in August. After so many months of waiting, we’re just as anxious as everybody else to get our hands on the final version of the game. We’ll report on any new information we get for Reckless Racing, such as a release date, as well as outline the upcoming lineup of other games from EA Mobile being released this year.