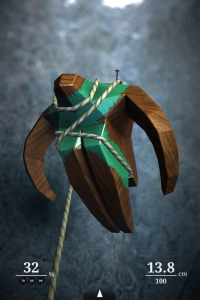 We just heard form Secret Exit, developers of Zen Bound [$2.99 / Free] and the currently iPad-only Zen Bound 2 [$2.99] that aside from dropping the price of Zen Bound 2 to $2.99, they also just submitted an update to make the iPad game universal. Not only that, but if you’re lucky enough to have an iPhone 4, the Zen Bound 2 universal update is coming packed with both Retina Display support as well as utilizing the gyroscope for increased accuracy when moving the rope around.

Both Zen Bound games are not games as much as they are experiences, the music pairs wonderfully with the relaxing gameplay of just wrapping a piece of string around a 3D object, and everything down to the in-game menus are simply beautiful. The original Zen Bound actually started as a PC game, but paired with the multi touch interface of the iPhone (and iPad), Zen Bound truly came to life on the platform.

Even if you don’t download the game, I really recommend giving the soundtrack a listen. All you have to do is plug your email address in to the Zen Bound web site.

Zen Bound 2 is one of my favorite iPad games, and with both a price drop and a universal update pending approval, it’s even easier to recommend picking this game up.