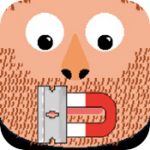 After our own Eli Hodapp highlighted three silly games you don’t need but should probably have anyway this past weekend, I couldn’t help but think this next game could very easily be on that list as well. Magnetic Shaving Derby is delightful in it’s peculiarity, and as long as you don’t expect too much from it, contains some enjoyable gameplay as well. If you’ve ever had the urge to shave your face by pulling a razor blade across it with a magnet, all while collecting various fruits, vegetables, and even bubble gum, then you are in luck today.

Using either touch or tilt, move a magnet around the screen that controls a razor blade as you shave a large, colorful, MS Paint quality face. Imagine the Wooly Willy from your childhood, only in reverse. Dragging the razor across the helpless chap’s eyes, nose, or lips results in screams of pain and copious amounts of blood lost, not to mention it brings down your score. It sounds odd, and it definitely is, but for some reason I just keep on playing. There’s a Time Trial mode that tasks you with shaving the face in as short a time as possible, with each painful nick adding time to your score. 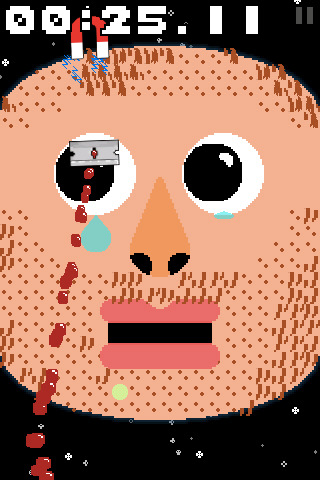 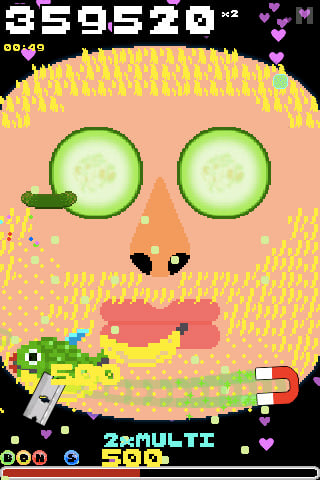 The Time Trial mode is good, but the real fun is to be had in the Score Attack mode. Here, you’re given 3 minutes to shave away at the face as much as you can, with the stubble growing back almost instantly. A blood loss meter at the bottom slowly dwindles away the more you cut the guy, and if it empties before the timer is up it’s game over. Tons of powerups and hazards litter this mode, and take it to the next level of craziness. Dragging the razor across a falling cucumber puts two slices of it over your eyes as protection, and collecting a ninja star sends your blade spinning like a whirlwind making it much easier to shave. There’s so many more things like this in the game, and it seems like I keep coming across new ones as I play.

Magnetic Shaving Derby has that intangible quality of “what the heck am I doing and why do I want to keep doing it?” going for it. The graphics are crude in an endearing way, and just silly enough to bring a smile to your face. The gameplay is interesting, but the controls aren’t the best. Tilt isn’t precise enough to do what you need to do, and while touch works well it can get tough when dragging near the edges of the screen. Also there’s OpenFeint integration for achievement and high score tracking, adding replayability to what is a pretty basic game. Even without any of this, Magnetic Shaving Derby delivers a lot of entertaining moments based on just the craziness alone.