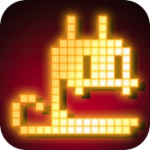 In a joint development from Bulkypix, Pastagames, and video game historians Pix’n Love, Pix’n Love Rush is a retro-inspired high score platformer suffering from ADD. The many influences that went into Pix’n Love Rush are hard to ignore. With nods to classics such as Space Invaders, Bubble Bobble, WarioWare and more, Pix’n Love Rush is a retro gamer’s dream come true crammed into an engaging pick-up and play package. Much like the graphical stylings, the concept is blissfully simple. Collect coins while negotiating the different platform environments, destroy enemies and avoid hazards. It doesn’t sound like much on paper, but coupled with the randomly generated sequence of levels and a nifty score multiplier system that actually changes the visual style of the game, Pix’n Love Rush will have you helplessly coming back time and time again.

If the game looks vaguely familiar, that’s because it’s an offshoot of the Arkedo series on the Indie Games Channel of Xbox Live, in particular the third game in the series 03 Pixel! (also co-developed by Pastagames). The purposely chunky pixel graphics look like something that would have blown you away running on a TI-83 calculator over a decade ago, but still manages to ooze all sorts of charm. The gameplay foundation is rooted in platforming, but not in the traditional sense. Each level is presented in a small chunk, and lasts just a short amount of time (some longer than others). For instance, you may start out on something akin to a Mario Bros. game, progressing from left to right. Then the next level may be a series of platforms moving upwards, and some even auto-scroll so you have to keep up. These bite-sized levels appear in a random order and are nicely varied, and much like WarioWare you must always be ready for what may appear next. 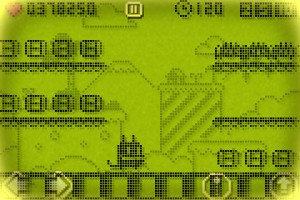 Left and right arrows control movement, and separate buttons control jumping and firing. You can only shoot straight up in the air Space Invaders-style and must be cautious with your bullets as the ones that miss the mark will fall back down to the ground, possibly hitting you if you aren’t careful. Collecting coins with a plus symbol will net you 250 points, and touching boxes with a minus symbol with deduct 500 points. There are enemies to take out with your weapon, sometimes moving and sometimes stationary, but there are also angels which must be protected from both the bad guys and your own errant bullets. Grabbing coins without getting hurt while avoiding minus boxes will work towards building up a multiplier to x2, x5, and x10. A handy indicator in the upper right corner shows you how close you are to each one, and similarly a heart icon in the upper right displays your remaining life. Beyond worrying about what level type is thrown at you next, you must constantly be getting the good stuff while avoiding the bad stuff, and it’s a wonderful challenge of your dexterity. 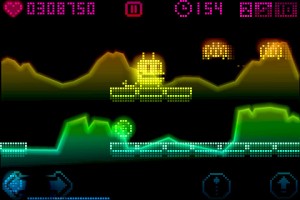 One of the neatest aspects of the game is how the background style changes with each multiplier gained. These different backgrounds are just as saturated in retro as the pixel graphics themselves, featuring accurate representations of the original Game Boy, the Game & Watch series of LCD games, and even a theme styled after the failed Nintendo Virtual Boy (headaches and eyestrain thankfully not included). It’s hard to explain the burst of excitement you feel from moving from one theme to the next, but it’s definitely a huge part of the appeal of Pix’n Love Rush. The Game Boy art is especially authentic, and made me feel as if I’d entered a time warp back to 1989 when I first fired up the legendary system. There’s currently 7 different background themes spread across the games 5 minute timed mode and Infinite mode, with more planned in future updates. It’s a nice variety of the bite-sized levels, and while you’ll recognize certain sequences as you spend more time playing the game the random nature in which they’re presented ensures the game feels different just about every time you play.

There are a couple very minor issues I had while playing, the most notable being the placement of the jump and fire buttons – they’re just too far apart for my liking. There’s nothing worse than knocking your multiplier down a level because you jumped into an enemy when you meant to shoot him. Otherwise the controls function just as well as virtual controls can on a touch screen. The other issue is the quirky way in which high scores are recorded. OpenFeint is integrated for achievements and leaderboards, but currently your score will only be uploaded if you break the one million mark. This isn’t too terribly difficult to do once you’ve played the game some, but still seems a little bit too inspired by the hardcore nature of old-school arcade games. These two issues are on their way to being rectified, however, as both Bulkypix and Pastagames are actively addressing feedback in the game’s forum thread. Even with these minor complaints, Pix’n Love Rush comes together beautifully to create a game that’s perfectly suited for long or short play sessions, and beckons to be played over and over as you work towards high score glory.