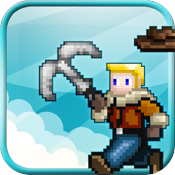 Back in the prepubescent days of console gaming, the leap from the 8-bit to the 16-bit generation was monumental. More colors, scrolling backgrounds, gimmicks such as Mode 7 and Blast Processing… and twice as many bits. What were bits? I didn’t know, I was just a kid, but it didn’t matter. I now had twice as many of them, and they made my video games look better and do things that I could have never imagined. Since those days, I’ve been just as devout a gamer as I was back then, but have yet to ever really feel that same magic of entering into the 16-bit generation. Little did I know that nearly two decades later I would capture that feeling again with Super QuickHook. The followup to developer Rocketcat’s inaugural game Hook Champ, Super QuickHook takes everything great about the first game and expands upon it in every way. If you were a fan of Hook Champ already, then you most likely instantly purchased this game. But if you were like some people who never quite got into it, Super QuickHook makes some smart changes that may just win you over this time around. 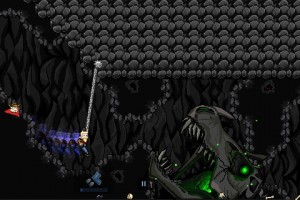 Hook Champ was said to be inspired by 8-bit graphics, and Super QuickHook takes it a step further and adopts a beautiful 16-bit style. But it truly is merely “inspired by”, as the game produces graphics that would have never been possible on the 16-bit machines of the 90’s. It looks simply stunning in motion. There’s so much life in the little details of this game that even if you aren’t a fan of 8 or 16-bit graphics you’ll find it hard not to be impressed with Super QuickHook. It’s bright and colorful, and the levels are nicely varied. Small touches like a flock of birds scattering from a tree as you pass by, or objects on the ground getting kicked up as you trot over them contribute to make the game come to life. The characters are all interesting and well designed, with no shortage of hats to adorn upon them. There’s even a couple of extra playable characters you can unlock, with more coming down the line via updates. The music is also superb, fitting with the retro style of the game, and thankfully there’s much more variety in music and sound effects than there was in Hook Champ.

Gameplay-wise, the same general concept from Hook Champ is carried over to Super QuickHook. You’ll swing your character from left to right using a grappling hook, collecting coins along the way to spend in the game’s shop on upgraded equipment and fabulous hats. While it seems mostly the same on the surface, two very important changes have been made to cater the game to a more casual audience. First and foremost, there is nothing chasing you through the levels (at least in the story mode) that forces you to either keep moving or suffer instant death. You’re free to explore the levels at will and take as much time as you need to complete them. The other big change is the addition of checkpoints throughout the levels, so if you have a fatal mishap you don’t have to start all the way over from the beginning as long as you’ve crossed one of these checkpoints. 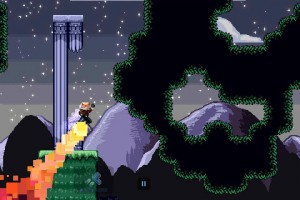 These were the two biggest complaints from people that didn’t end up liking Hook Champ, and it’s great to see them rectified here. But it thankfully doesn’t dilute the experience for the hardcore players either, since your final score for each level is based on time and coins collected. There’s still plenty of incentive to find the perfect line through the level in order to net every coin, or figure out a new trick that can shave off a fraction of a second from your time. Another complaint you’d hear about Hook Champ was the brutal difficulty of some of the later levels, requiring pinpoint accuracy with the grappling hook to complete. Well, those type of levels are still here but are infinitely more tolerable thanks to the changes made. There’s also reason to go back and replay each level, as you’ll earn medals based on collecting all the coins, beating a developer’s score, and finding the secrets stashed in each one.

And then there’s Avalanche Mode. In addition to the 18 freestanding levels that are included, Avalanche Mode is an endless high score level that’s randomly generated from over 60 different smaller set pieces each time you play. Unlike the normal levels, you have the constant threat of the avalanche chasing you as you go, much like the ghost from Hook Champ. You can also collect coins in this mode, making it a nice way to earn some extra cash for the shop. Avalanche Mode could easily sell as a completely separate game by itself, and has just as much depth and replayability as similar high score games like Canabalt or Robot Unicorn Attack. Rocketcat has also hinted that a second, harder Avalanche mode will be added to the game in the coming weeks. This mode will likely get the most play time from gamers, as it offers near-infinite replay value.

I haven’t been this impressed with the evolution of a game of this nature since the original Metroid spawned the phenomenally brilliant Super Metroid. It won’t alienate previous fans with the changes it’s made, as it still retains the great feel of Hook Champ, but also intelligently caters to casual and hardcore gamers, offering the best of both worlds. The graphics are gorgeous, and despite the retro inspiration Super QuickHook is visually impressive even by today’s standards. It offers so much content and such high production values, it’s as near-perfect as any iPhone game I’ve played thus far, and is bound to be an even greater cult-classic than even Hook Champ was. It’s a shining example of how a sequel should be done, and will live a long happy life on my device forever.