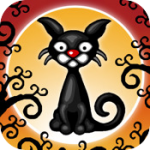 It’s no secret that we at TouchArcade are big fans of Donut Games. They have a reputation of consistently delivering fun games with simple mechanics, wonderful pixel art, a polished interface, and a ton of replay value. This rings true yet again as their latest game, Cat Physics, has been released to the App Store. In essence a physics based puzzler where you must get an object from point A to point B, Cat Physics has all the charm and replayability you’ve come to expect from Donut games, and appears to be another great entry.

The goal of Cat Physics is to successfully direct a ball from one onscreen kitty to another. The layout of each level, placement of the goal cat, and many different obstacles work to prevent you from completing this seemingly simple task. To aid you, moveable arrow icons can be placed in the path of the ball, launching it in the direction of the arrow displayed on each icon. How many arrows are on each level and what direction they point is always fixed (aside from occasional moving arrows), so it’s up to you to figure out the best way to utilize them to complete a level. Scoring is based on getting the ball from the starting cat to the receiving cat in as short a distance as possible. 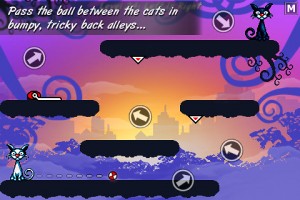 The level designs can be quite clever, and it’s a challenge to figure out the best way to deal with the objects in the ball’s path. These objects can affect your ball in many ways, and include tiny catapults, teeter-totters, teleportation vortexes, breakable barriers, and more. It takes a lot of trial and error, but is very rewarding when you finally find the best solution. There’s 50 unique levels to play through, as well as the lovely 3-star system (think Bronze, Silver, and Gold medals for each level) that is a hallmark of many Donut games. Similarly, an out-of-game online leaderboard for total scores is included. Gaining 3 stars on every level would be a tall order for even the most adept gamer, and there’s certainly a lot of content and replayablity here for your money.

As fantastic as Cat Physics is, there were a couple of blemishes that stuck out a bit during my time with the game. First, the arrow icons can require some extremely precise placement in order to maximize your score, and it sometimes seemed difficult to move them in the tiny increments that I needed too. Possibly due to my own fat fingers, so your results may vary. A more fundamental problem is that some of the levels are just flat out too easy. Like, you-don’t-even-have-to-do-anything easy. Sometimes you can just let your ball go, and it will safely find the goal by default. You likely won’t be getting any high scores by doing this, but still it would be nice to have a bigger level of user interaction required out of some of the levels. It’s more of a problem in the first half of the game, with the latter half being sufficiently elaborate in design and challenge. Neither of these issues do much in diminishing the enjoyment of playing.

If you’re already a fan of Donut Games, chances are you were downloading this the moment you read the title. And chances are you’re satisfied yet again. If you’re new to them, then Cat Physics is an excellent chance to get yourself acquainted. Even if this particular game doesn’t strike a chord, they make an assortment of games to suit just about every type of gamer, all at incredibly low prices. This latest offering is another winner, and comes highly recommended.