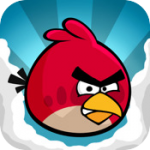 Clickgamer’s Angry Birds [99¢ / Free] has been one of my favorite games since it was first launched in December of last year. We thought the game was great in our review, and since then, Angry Birds has only gotten better with the surprising amount of extra content that has been added to the game via updates.

Angry Birds is a game that could easily be described with any number of cliches such as “easy to play, difficult to master", “polished", “addictive", and others. When it comes down to it, what makes Angry Birds great is how incredibly accessible the game is to everyone, even non-gamers. Gameplay amounts to a number of different birds, each with different abilities, loading themselves in to a slingshot. You then use a single finger to fling them at a fort filled with smug, smiling pigs.

There isn’t really any quick reaction elements to the game, or really anything that requires more than just intelligently analyzing the weaknesses in the pigs’ fortresses and aiming at them with your birds. Levels are scored and stars are awarded based on performance. Completionists can shoot for three stars, perfecting every level, and gamers just looking to have fun can generally clear levels with one star without too much trouble.

A previous update added Chillingo’s Crystal for all kinds of online scoring, achievements, and all that fun stuff along with 40 new levels. The last update added a new bird and 15 additional levels. This update adds another 15 levels and a new level theme. The amount of content in Angry Birds when it first launched was more than enough, but after all these updates, you really need to pick this game up if you haven’t already.