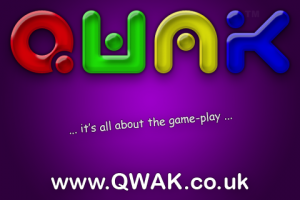 Back in 1989 now-veteran UK game developer Jamie Woodhouse released a lively little puzzle / platformer called Qwak for the 8-bit BBC Micro home computer. Not long after, he joined forces with Team17 to develop an enhanhced, two-player Amiga version of the game, which was released in 1993 and featured faster action and more frantic gameplay. The rather well-reviewed title (Amiga Computing magazine gave it a “Gamer Gold" 92% rating) later made its way to the Gameboy Advance as well as the Mac and PC.

We’re pleased to report that Jamie recently got in touch with Touch Arcade to give us an exclusive look at the iPhone version of Qwak he has just completed and will be shortly launching through the App Store. 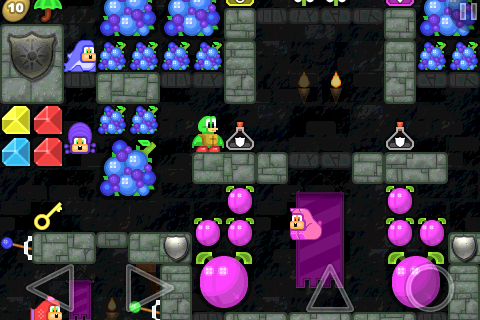 In Qwak, you control a duck (get it?). Your objective is to guide this green duck through level after level of platforms, fruits and gems (worth points), bouncing enemies, power-ups to help demolish said enemies, and keys to unlock goodies as well as the level’s exit gate. Your duck can run, jump, and fire volleys of egg projectiles to knock out the baddies. Grab a bonus item and watch a hail of colorful fruit rain down upon you. Take too long on a level and meet a hail of spikeballs. In a nutshell, I call it frenetic, fun, and rather fruity (to be alliteratively wanton).

I’ve spent some time with the prerelease build of the game Jamie provided us and it’s been lovely to play. It’s a touch-controlled affair with a left / right control in one corner and jump and egg-fire controls in the other. The vibrant visuals move about the screen as smooth as glass on the iPhone 3GS test device and a very Amiga-sounding score accompanies the action. It feels both retro and highly polished. It’s a game platformer fans won’t want to miss.

[ NOTE: Our original video embed ran at half-speed for some reason, the video has been replaced with a speed-accurate version. Have another look. ]

Additional details, I’ll leave to the developer to provide (after the jump), as he was kind enough to grant us an interview along with the exclusive ad hoc build.

What were your inspirations for writing the original?  Are there any particular games you had in mind?

Well, there was a bunch of platform games on the Beeb I used to play; Blagger, Monters, Space Panic, Frak etc. I also went in the arcades a lot back then (so much so that I got kicked out of college), and I undoubtedly played Bubble Bobble, which Qwak gets compared to a lot.

What language did you use to write the BBC Micro version?

100% 6502 Assembler. You could quite easily mix BBC basic and assembler, or have 100% assembler; which a lot of game developers did back then, and you needed to, to get the best performance out of the very limited and slow hardware. Fun times!

Is the BBC Micro version, in fact, the original?

Yep, it’s the original. It was released in 1989 by Superior on a 4 game compilation. I still have a review of the game from a 1989 A&B Computing magazine; “The best game of the bunch has to be Qwak! Designed and coded by Jamie Woodhouse it is very addictive and great fun..”.

I think that was the first time I’d ever seen one of my games reviewed and in print; felt pretty good as I stood there reading the mag in the newsagents!

The ’93 Amiga rework is a bit more fast paced / arcadey than the original. GBA and PC / Mac versions followed. It seems the iPhone ver is really an adaptation of the later versions, is that true?

Yeah, I guess it’s confusing with all the different versions all sharing the same name; but with different graphics and various gameplay mechanics…

The GBA version came next, which was a port of the Amiga version, I used all the same graphics and levels etc; and just added in some scrolling to accommodate the GBA’s smaller screen resolution.

Actually, I couldn’t find a publisher for the GBA version so I had a load of carts shipped over from China and self-published a small limited run of carts. All sold out now!

Next came the PC version, which had completely new levels, more tricks and traps, different power-ups and secret bonuses; and a lot more going on visually to! The Mac version was a port of the PC version.

For the iPhone version of Qwak, I’ve managed to retain pretty much everything that’s going on with the PC version. It’s based on the PC version; but there’s a little scrolling, to squeeze the levels in to the smaller iPhone screen resolution. I don’t think it hurts the game-play too much.

How are you liking iPhone game development as opposed to what you’ve done on the Amiga, GBA and other platforms?

I’m absolutely loving it so far!

There’s a bit of a learning curve, with this being my first iPhone game; but I feel as if I’m making good progress and getting a good technical understanding of the platform.

The Amiga and GBA were also fun platforms to make games for; and as with the iPhone, you have a pretty solid idea of the minimum spec machine people will be playing your game on (which doesn’t happen with desktop game dev). Plus, it’s relatively a low powered device (compared to desktop PC’s), which is awesome! … because there’s more scope for programmer creativity in squeezing more performance from the device (game developers secretly love that kind of thing!).

The music track sounds very Amiga. Is the audio straight from that version?

Yep, it’s got the same 10 tracks of music from the Amiga version (which used to be in .MOD format, was a little tricky converting them to .MP3s).

Can you comment at all on the controls of the iPhone ver, thoughts that went into them, etc?

Well, Qwak is quite a fast paced game, so I felt some kind of on-screen D-pad control mechanic would work a lot better than using the accelerometer.

There’s also an issue that your thumbs and fingers may obscure the in-game action; so what I’ve done is when the player is at the bottom of the screen; the screen kinda shifts up a little bit, so you can still see yourself.

I also have the fire (throw egg) button on the right hand side, so it’s easy to waddle your wrist and throw eggs really quickly, one after the other (which is handy as the bigger baddies need multiple hits to ‘dispatch’ them).

The controls work for me; but it’ll be interesting to see how people respond when they’ve tried the game for themselves. I’m wondering too, how left-handed players with cope with the controls. I just hope I get feedback and people let me know, it’s always great to hear what’s working and what needs changing or improvement (and it’s always possible to do an update).

Is there anything down the road you can speak of?

There’s quite a few ideas I have; and it’s funny you should say ‘road’ … as I’m half tempted to do a re-envisioned version of Nitro or ATR. There doesn’t seem to be many top-down perspective racers on the App Store.

I’m also thinking ‘Qwak spin-off’ … I often worry that Qwak may be TOO frantic and fast-paced for a lot of people (although I personally love that kind of thing), so the spin-off game would be slightly slower paced, with more exploration and puzzle solving (and tricks and traps, hehe).

What are your thoughts on the iPhone as a game platform, and the overall situation that is the App Store?

I really like it, it’s a lot of fun to make games for, and I feel genuinely excited at the prospect of making more games for it.

I’m still pretty new to the App Store; but my first impressions, I guess there seems to be a lot of variation in the quality of games on there; from really poor, to really awesome.

I really like the fact that it’s possible for small indie game developers, to make the kind of games they want to make, and share them with other people through the App Store. There’s not so much need for any middle-man or publisher or anything like that. So it’s a lot more accessible to developers that a lot of platforms.

Qwak should be landing in the App Store shortly. We’ll give folks a heads-up when it arrives. Those impatient for a taste of the action can download the Mac or PC demo version for free. This is a good one, folks.