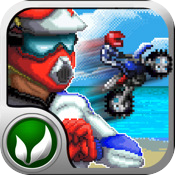 Work originally began on Motocross Challenge way back in 2004 as the part-time project of three individuals with a desire to create an homage to the classic Excitebike and Motocross Maniacs titles. Unfortunately, various publishing pitfalls and shifting markets prevented it from ever arriving on its intended platforms, the GameBoy Advance and subsequently the DS. By early 2007, with no hope of a retail release in sight, developer DHG Games decided to put the project to rest and give away the completed game for free via their website. While not standing to profit from all their hard work, at the very least a small amount of players among the homebrew community would have the opportunity to enjoy their creation using a GBA emulator or flash cart.

Fast-forward to 2010, where it’s relatively easy publishing a game to Apple’s App Store, and Motocross Challenge is being given a second chance at life. It’s a touching story of perseverance, but ultimately what matters is if the game itself is any good. Thankfully, it most definitely is, and five or six years ago it likely would have been a top selling GBA game. It still holds up really well today, and a lot of effort has gone into enhancing the game for the iPhone. But like many ports it does suffer from some of the common drawbacks that can befall a game when transitioning to a non-native platform. 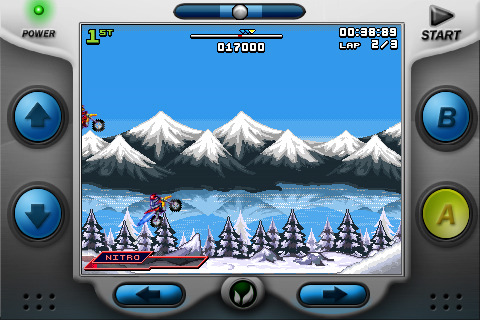 The most glaring of these drawbacks is the immediately noticeable screen overlay. Since the game was originally designed for the GBA, it retains the aspect ratio and resolution of that system’s screen. What this means is that the entire game is presented in a smaller window within the touch screen, with a virtual button overlay made up to look like a nondescript portable gaming system surrounding its border. It doesn’t necessarily look bad, and it functions properly, but you’ll have to be accepting of the fact that there’s not an option for a full screen mode. If you can get over this aesthetic hurdle, an highly entertaining gaming experience is waiting for you. 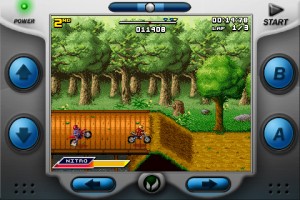 Much like the recently released Giant Moto, Motocross Challenge really nails the look and feel of its inspiration but offers a much more complete package overall. Graphically it looks like the high quality GBA game that it is, with impressive pixel art and colorful scrolling backgrounds. There’s only one option for controls, but it works really well. Separate A and B buttons grace the right side of the screen for gas and nitro, and up and down arrows are set on the left side of the screen for controlling lane changes and performing tricks. Tilting the device affects the angle of the bike and allows for full frontflips and backflips if you can catch enough air. Once comfortable with the controls, it’s simply a delight to play and actually feels like a natural evolution of the Excitebike formula.

There are 10 distinct track locations spread across 30 different events which include standard races against three AI opponents, time trials, and trick attacks. The trick attacks are especially enjoyable, and have you completing as many in-air stunts as you can during one lap. I’ve replayed these multiple times trying to improve my score just because it was such a blast. The campaign is broken up in a way that there’s almost always a few choices of which events to partake in. In general the game is a bit on the easy side, but difficulty does ramp up nicely towards the latter half. The entire game can be completed in only a couple of hours, but that doesn’t diminish how absolutely fun it is to play through. In addition, OpenFeint integration provides leaderboards, challenges, and achievements that extend the replay value a great deal.

The road Motocross Challenge traveled before finally arriving on the App Store was a tumultuous one. What was originally planned to have sold for $20 or $30 on Nintendo’s handheld a few years ago can now be had for an introductory price of just 99¢. Despite a couple of funky aspects due to the translation to this platform, the core experience remains incredibly fun. It’s obvious DHG Games is a talented developer, and it would be interesting to see what they could do in creating a game built specifically for Apple’s device. Until then, Motocross Challenge is by far the best option available for scratching that Excitebike itch.