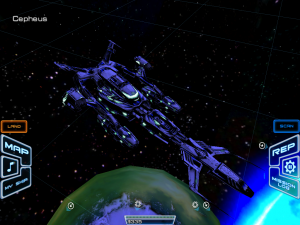 At this point we’ve posted about Freeverse’s Warpgate so many times that linking to the various previews over the last year just seems excessive. From its very beginnings at WWDC ’09, Warpgate piqued my interest, and as information slowly leaked out of Freeverse regarding the game’s development, it seemed like it was set to exceed even my wildest expectations– Provided they could live up to nearly a year of pre-release hype.

Warpgate HD [App Store] was among the initial batch of games available along side the launch of the iPad, and was the first game I loaded up following unboxing mine after waiting what seemed like an eternity to sync. Since then, Warpgate has sucked me in in the worst way. Describing games as “addicting" or “addictive" has become the absolute worst cliche of the App Store, both in descriptions and game reviews, but I’m having a hard time coming up with a better way to describe my attraction to this game.

To give some perspective, things I love in video games in no particular order includes anything to do with space, massive game worlds, warring factions you can take part in, an impressive sense of scale, and as much randomization as possible to provide endless replay value. Warpgate has all of these things and more. 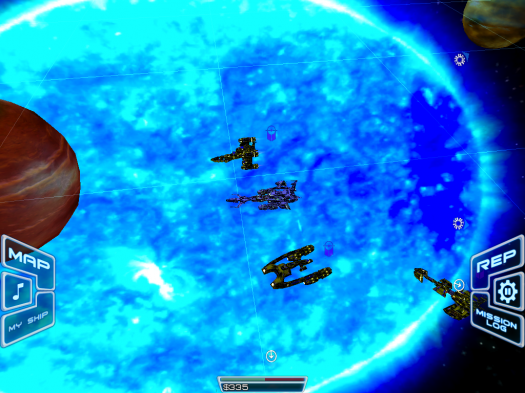 Obviously set in space, Warpgate is host to a gigantic galaxy map that you slowly explore through a seamless set of campaign missions. Once you complete the initial tutorial, and start in on the “real" game, procedurally generated missions begin appearing that have you flying places, delivering things, getting in to battles with other ships, and other objectives. Because of this, the game never technically ends.

Warpgate is remarkably open, so much so that if you’re the kind of gamer that requires a rigid goal structure with a concrete “end" to a game, it might just drive you crazy. The end goal of Warpgate is whatever you want it to be. If that means grinding up reputation with the space pirates and piloting the biggest, baddest battleship in the entire galaxy, killing everything in your path, you can. Or, on the opposite side of things, you can be completely lawful and play your cards so you’re in good standing with all the factions of space.

Or, if you don’t care about that, and you just want to have billions and billions of space bucks, Warpgate is conducive to that play style too. There’s an entire dynamic economy in game and if all you want to do is ferry around commodities between planets buying low and selling high, you can. In-game news feeds will help you keep an eye on the pulse of the universe, and you can often make an insane profit by quickly delivering huge loads of much needed cargo to planets that show up in the news. 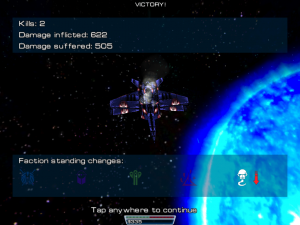 If you don’t like power gaming these kinds of games, and just want to have fun in space, that works too. Warpgate seems to be balanced in a way that both rewards power gaming the economy and in-game faction system as well as being conducive to casual gamers just bouncing between campaign missions without getting too involved in the other parts of the game. Mostly, playing the in-game markets is optional, and you might only have to participate in buying and selling commodities if you’re low on money and need to buy an expensive quest item or want to further upgrade your ship’s weaponry.

Alternatively, if you really don’t want to grind up money to buy things, there’s an in-game store where you can buy a huge battle cruiser and tons of space bucks for a few real dollars. Other than that, you can just follow the campaign missions and have a great time.

It seems like App Store gamers are always clamoring for depth in games, something that has become exceedingly rare as pricing across the board has hit rock bottom. Warpgate has depth on top of depth. To give you an idea of how much content is in the game, the galaxy map is host to 36 star systems. Those star systems are home to 120 different planets and space stations. While you’re marauding around the galaxy, you can pilot one of 172 different star ships, and equip your ship with the 60 included weapons. It’s really just insane how much is packed in to this game.

As far as an iPad game is concerned, Warpgate HD is great. Since the launch of the device, we’ve played almost everything worth playing, and it seems like the control method that I’ve been preferring the most is one where you can comfortably rest the iPad in your lap, holding it with one hand, and playing with the other. This is exactly how Warpgate works. 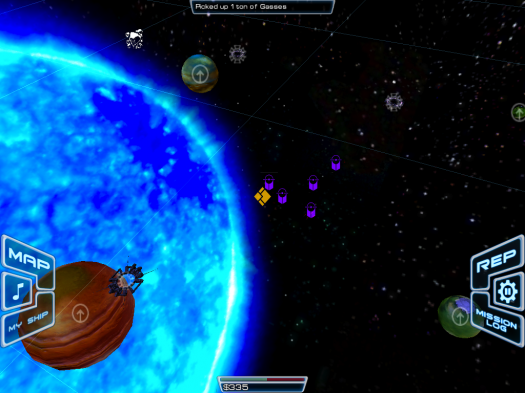 You control your ship either by touching anywhere in the game world to fly there, swiping in the direction you want to fly, or touching one of the icons on the side of the screen indicating the direction of a planet, warpgate, or other point of interest. Context sensitive buttons appear to allow you to warp through a warpgate, land on a planet, scan another ship, answer an incoming communication, or fight another ship.

The camera is controlled using all the same familiar multitouch gestures such as two fingers to rotate and pinching to zoom in or out. Speaking of zooming the camera, this is one of my absolute favorite things about the game. With a pinch of your fingers you can go from seeing the minute details of your ship, then instantly and fluidly pan the camera all the way out to show all the nearby planets. This level of zoom control and sense of scale is so cool that the first hour or two that I played the game I couldn’t help myself but just constantly zoom in and out.

If you’re looking for a fast paced action game, Warpgate is not it. While narrowly escaping from pirates as you just barely warp before getting hit with a missile that would destroy your ship can be exciting, by and large the game is fairly slow. You will spend a lot of time watching your ship flying from place to place, and when you’re actually fighting, combat isn’t anywhere near as interactive as I had hoped it would be. 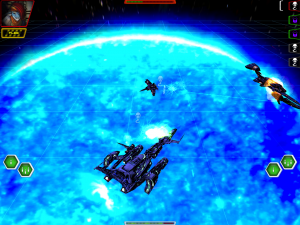 When you tap the button to enter a battle, the screen zooms, twists, and blurs just like a Final Fantasy. The game then quickly loads in to a battle sequence where your ship will be flying in a swarm with the other ship (or ships) you’re fighting. You don’t have any control over your ship’s movement at this point, and all you really do is choose when to fire what weapons by mashing buttons that appear on either side of the screen and select the target you’re firing on. It gets the job done, but feels surprisingly remedial compared to the rest of the game. If there’s one area that Warpgate needs improvement, it’s in fleshing out this battle system to add some strategy beyond mashing your weapon buttons as they come online.

Originally designed as an iPhone game, the non-HD version of Warpgate will be available on the 13th, Warpgate will intelligently scale across the entire iPhone and iPod touch family, enabling the different graphical effects depending on what device you’re playing on. If you’re playing the game on a 3GS or 3rd generation iPod touch, you’ll see all kinds of fancy shader effects. If not, the game should still look good without them and run at a great frame rate to boot. Aside from the smaller screen size and a reworked user interface, the iPhone version of the game will be identical to the iPad. 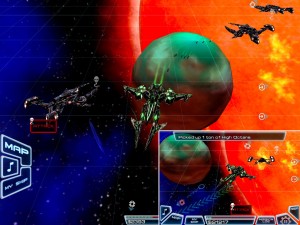 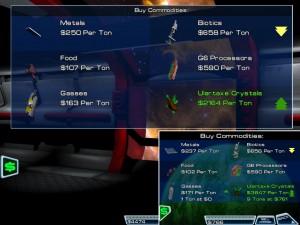 While I’m having a great time with Warpgate, one thing really makes me nervous about a game of this scope. There’s no way to manage your game saves, back up your game, or anything like that. I have invested hours upon hours in to Warpgate, and I’d hate to think that I could lose it all from some update SNAFU, iTunes sync weirdness, and the countless other things I’ve run in to in the past that have resulted in random save game data loss. Especially with an iPhone version on the horizon, there’s nothing more I’d love to see than some kind of online Plus+ powered save game synchronization between devices, or anything else to add some kind of security that my massive space empire is here to stay.

Overall, in my eyes, Warpgate has completely delivered on the months of pre-launch hype. Playing the game on my iPad feels like the future, and something that you would see some space kid playing on a similar tablet device in an 80’s sci-fi movie. The mood of the game is great, the graphics are phenomenal, the in-game soundtrack has an epic feel to it, and even the icon is cool. Sure, the battle system could use some work, but that is just a small part of an otherwise remarkable game.

Warpgate HD is currently my favorite iPad game, and if you’ve ever enjoyed a space conquest game in the past, this is a game you need to download. If you don’t have an iPad, the iPhone version will be coming April 13th, so keep an eye out for that.